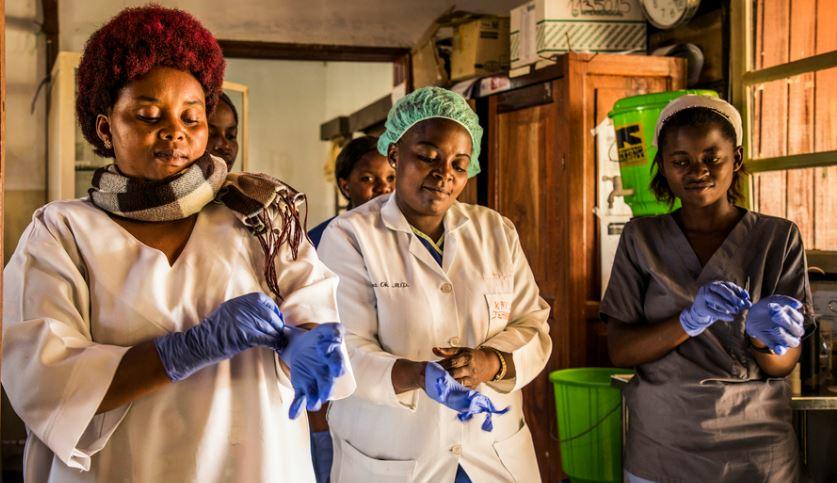 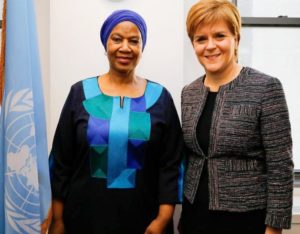 UN Secretary-General Antonio Guterres said in his IWD message, “We need to find innovative ways of reimagining and rebuilding our world so that it works for everyone. Women decision-makers in areas like urban design, transport and public services can increase women’s access, prevent harassment and violence, and improve everyone’s quality of life.”

“Increasing the number of women decision-makers is fundamental. At the United Nations, I have made this a personal and urgent priority. We now have gender parity among those who lead our teams around the world, and the highest-ever numbers of women in senior management. We will continue to build on this progress,” said Guterres.

“In recent decades,” the secretary-general said, “We have seen remarkable progress on women’s rights and leadership in some areas. But these gains are far from complete or consistent – and they have already sparked a troubling backlash from an entrenched patriarchy.”

“Gender equality is fundamentally a question of power,” Guterres said. “We live in a male-dominated world with a male-dominated culture. Only when we see women’s rights as our common objective, a route to change that benefits everyone, will we begin to shift the balance.”

The IWD campaign theme of #BalanceforBetter is a call to action to accomplish gender balance. And supporters from all walks of life are acting to achieve that balance. 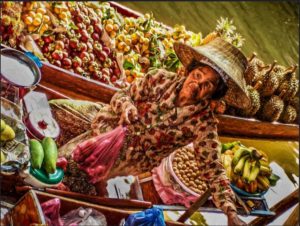 An elderly Thai woman delivers a plastic bag of tropical fruit from her boat floating in the canals at the famous floating market at Damnoen Saduak, west of Bangkok, Thailand, February 10, 2006 (Photo by Wayne S. Grazio) Creative Commons license via Flickr

To celebrate International Womens’ Day on March 8, Kiva, an international crowdfunding nonprofit based in San Francisco, is using its website to encourage people to use their bank balances to lend to women-owned businesses and female entrepreneurs around the globe who lack access to traditional financial credit.

These are microloans, but they do add up. More than 2.5 million people have raised over US$1 billion on Kiva, founded in 2005. Borrowers’ projects are posted on the Kiva site and lenders can choose to contribute as little as $25.

“More than 1.7 billion people around the world are unbanked and can’t access the financial services they need,” Kiva said in a statement announcing its support for International Womens’ Day.

With a 4 out of 4 star rating from Charity Navigator, Kiva says “100 percent of every dollar you lend on Kiva goes to funding loans.”

“Neither Kiva nor Kiva lenders make any money from the loans they facilitate. Because of this, Kiva is able to partner with groups based on social motive, rather than profit motive,” Kiva’s President Premal Shah told “The Guardian” newspaper.

International Women’s Day (IWD) has occurred for well over a century, with the first IWD gathering in 1911 supported by over a million people in Austria, Denmark, Germany and Switzerland.

The campaign, “Against the Current,” features each of the four women “battling” the four elements – air, earth, fire and water – and describing their own personal battles. Halsey, fresh from her chart-topping song “Without You,” searches for shelter in a rainstorm and swims in a deep pool.

Each of the other actresses faces her own challenge: for Awkwafina it’s a windstorm, for Polanco fire, and for Nef the earth, all while wearing signature styles from ModCloth.

The clean cooking nonprofit Stove Team International is taking the occasion of International Womens’ Day 2019 to honor Rossana Berganza, who with her husband started the E’Copan factory in her hometown of Copan Ruinas, Honduras to manufacture safe, affordable and fuel-efficient cookstoves.

More than half of the Honduran population continues to use solid fuels and open fires to cook, regardless of the respiratory damage they cause.

StoveTeam believes that by empowering students, a cultural shift can occur in the long-run, where more families value and have access to clean cooking technology.

Currently, Berganza is sharing her clean cooking wisdom with 30 local school children from families of extreme poverty. They meet once a week to enjoy a snack together while learning about the importance of clean indoor air.

Berganza said, “Sometimes, families who are the poorest go unnoticed. This program is important because it takes their needs into account. It is a great opportunity for these children because it gives them an extra chance to learn about clean cooking and provides them with a meal each week.”

She hopes to empower these young students to share this information with their families and to be leaders within their communities.

In San Diego, California on March 8th, female brewers are coming together to make a special IPA. Chapters and members of Pink Boots Society will gather along with supporting breweries and individuals, put on their pink boots and brew their chosen beer style.

Pink Boots Society splits proceeds from sales of this collaboration brew with participating chapters. The revenue is applied to educational scholarships and programming for its members.

Today the local-search service Yelp announced that it partnered with Rebecca Minkoff’s Female Founder Collective  to launch a “Women-Owned Business” attribute on Yelp.

Founded last year, the Female Founder Collective is a platform for female business leaders to connect and support each other, socially, legally and economically.

It now has more than 3,000 members, including the founders of hair company Drybar, theSkimm newsletter, lingerie firm ThirdLove, LOLA sexual health products, and The Wing, a female co-working space collective and club.

According to the National Association of Women Business Owners, more than 11.6 million firms in the United States are owned by women, employing nearly nine million people, and generating US$1.7 trillion in sales as of 2017.

“Millennial consumers buy from brands whose purpose and values they support and identify with,” says Minkoff. “By creating a socially visible symbol for female-owned companies, we effectively shape modern consumers’ purchasing decisions. By attracting more of the millennial audience who identify with and want to actively support female entrepreneurship, we provide female founders with a sustainable market growth strategy.”

legal discrimination, the World Bank has issued a new study, “Women, Business and the Law 2019: A Decade of Reform.” It examines 10 years of data through an index structured around the economic decisions women make as they go through their working lives.

Kristalina Georgieva, interim president, World Bank Group, said, “The data show there has been great progress towards legal gender equality over the past decade. In 131 economies there have been 274 reforms to laws and regulations, leading to an increase in gender equality. This includes the 35 economies that implemented laws on workplace sexual harassment, protecting nearly two billion more women than a decade ago.”

“But the average global score is 74.71, indicating that a typical economy only gives women three-quarters the rights of men in the measured areas,” Georgieva said.

S&P Global announced Wednesday that it is celebrating International Women’s Day and women everywhere by displaying a large-scale public art installation at the Oculus at Westfield World Trade Center in New York City.

Over 70 stock exchanges from Chile to Croatia, from Tanzania to Tunisia, will host bell-ringing ceremonies to raise awareness of the pivotal role that business and markets can play in advancing gender equality.

In support of UN Women and as a proud signatory of the Women’s Empowerment Principles, in New York, NASDAQ closing bell will be preceded by an event with UN Women Deputy Executive Director Åsa Regnér on innovation and gender equality.

Women Behind the Camera

Celebrating the diversity of women, March 1 saw the Inaugural IWD Photo Competition launched on the EyeEm platform to celebrate women for the entire month of March. This exciting worldwide competition is open to photographers of any gender – and participants can download the EyeEm app for free on iOS or Android to participate.

Celebrating diverse imagery of women challenges perceptions through better reflecting the vibrant and varied communities in which we live and work worldwide. Photographers and industry can certainly play a critical role in helping forge a more gender-balanced world – #BalanceforBetter.

A specially curated IWD 2019 Image Collection is available for licensing. At least 20 percent of the licensing revenue is being donated to International Women’s Day Charity of Choice, the World Association of Girl Guides and Girl Scouts, representing 10 million girls in 150 countries.

Sarah Nancollas, WAGGGS chief executive, said, “In many countries and communities around the world, Girl Guides and Girl Scouts are working at national or local levels to support female refugees.

Joumana fled to Lebanon from Syria in 2011 when war broke out. “I discovered that life doesn’t stop with a bomb, our dreams shouldn’t be destroyed by a war. I am Girl Guide and it doesn’t matter if I am Syrian, Lebanese or German, what matters is that I am happy and I feel alive again!”

In partnership with global communications company WPP and Amazon’s Alexa, UN Women is amplifying the Unheard Stories of grassroots leaders and their incredible work. We invite you to listen and share the stories that inspire you at unheardwomen.org

Follow @UN_Women to take one of the daily challenges, from finding a woman on your currency to sharing a street named after a woman in your town. A new challenge will be revealed every day!

The event will showcase women’s role and experiences working from the inception of technology and innovations and identify ways in which the UN system and partners can accelerate actions to guarantee that no woman or girl is left behind, regardless of where she lives, how much she earns, or where she comes from.

As part of the event, Google is premiering the trailer of a new four-part virtual reality series about women’s rights activists around the world. The four films, produced by Google in collaboration with UN Women, are set to debut on International Women’s Day, both online and in a multimedia exhibit at UN headquarters.

UN Women in partnership with the Global Innovation Coalition for Change will launch on March 8 the She Innovates Global Programme. The program supports women in innovation by providing access to development tools and resources, as well as connecting innovators worldwide.

UN Women offices will join the commemorations through a variety of events, including mentorship events with young girls in Rwanda, a film festival in Albania, panel discussions in Hong Kong, photo exhibitions in Nepal and Barbados, and a parade and concert in Sierra Leone, among many more.

“Innovation is shaping and changing the way people live in every part of the world, so we have to be intentional about its use to positively impact the lives of women and girls,” said UN Women Executive Director Phumzile Mlambo-Ngcuka. “It’s a key component of development, a basic need for those living in poverty, and a far-reaching enabler of rights.”

“Women and girls must have opportunities to contribute to both the design and execution of solutions affecting their lives,” said Mlambo-Ngcuka, “and they are more than ready to do so.”

“On this International Women’s Day,” said the UN secretary-general, “let’s make sure women and girls can shape the policies, services and infrastructure that impact all our lives. And let’s support women and girls who are breaking down barriers to create a better world for everyone.” 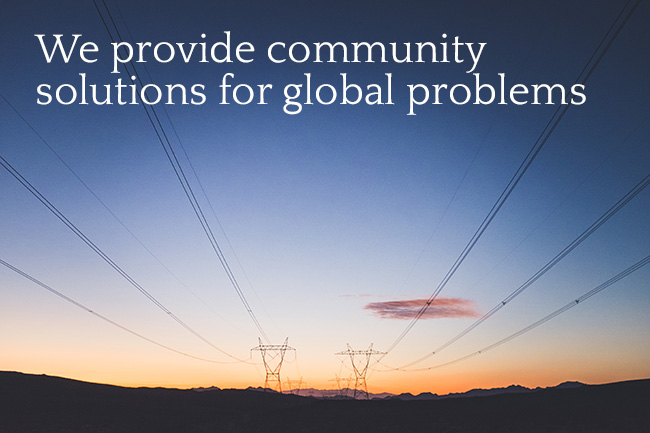