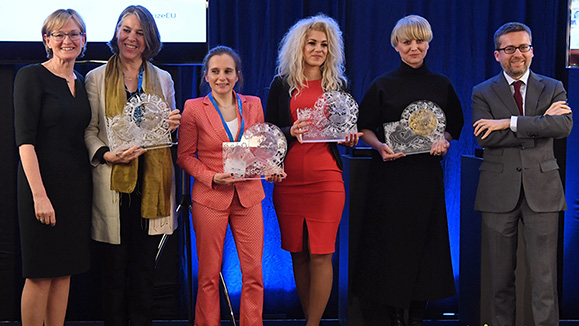 BRUSSELS, Belgium, March 9, 2017 (Maximpact News) – Four innovative European women won rich prizes last night at a ceremony in Brussels in celebration of International Women’s Day March 8. All winners have recently founded or co-founded a successful company based on their groundbreaking ideas, and all have received research and innovation funding in the past.

Funding for the EU Prize for Women Innovators comes from Horizon 2020, the largest-ever EU research and innovation program  with nearly €80 billion of funding available over seven years, 2014 to 2020, in addition to the private investment this money is attracting.

The winners of the 2017 EU Prize for Women Innovators are:

1st Prize (€100,000): Michela Magas, of Croatian/British nationality, is founder of Stromatolite, a UK Design Innovation Lab with a studio in Sweden, building a new generation of incubation and creative technology toolkits for innovation.

The Design Innovation Lab has built the Music Tech Fest platform – one of the first real Innovation Ecosystems with a community of over 5,000 innovators. With this, Magas has established a unique innovation ecosystem, policy context and support structure for radical and disruptive innovation by a wide community of creative developers.

Rather than taking a single product to market, her ecosystem has created a fast track to innovation, yielding multiple innovative products and services.

Stromatolite has participated in four projects funded by Horizon 2020 and the 7th Framework Programme for Research, coordinating two of them.

2nd Prize (€50,000): Petra Wadström from Sweden, is founder of Solvatten, which produces a portable water purifier and water heater that are powered by solar energy. Solvatten is a durable, efficient and easy-to-use way to make water safe and hot.

Wadström is a biochemical research technician and mother of four. After years of research she turned a passion for art into a career. She says being an artist has helped her to think outside the box, combining elements of science and creativity.

3rd Prize (€30,000): Claudia Gärtner from Germany is founder of microfluidic ChipShop, which provides “lab-on-a-chip” systems as miniaturized solutions for better diagnostics. Microfluidics are considered to be the enabling tool for a novel approach to analytics and diagnostics, enabling the production of a wide range of tailor-made products and on-chip applications.

She leads a wide variety of research projects for the development of lab-on-a-chip systems for life science applications.

In 2002 Dr. Gärtner was nominated for the German Founders Prize and received the Thuringian award for the best business concept for ChipShop.

A new category was introduced this year – the Rising Innovators Award – which recognizes excellence in female entrepreneurs aged 30 years or under.

The first winner of the prize worth €20,000 is Kristina Tsvetanova from Bulgaria, co-founder and chief executive of the Austrian company, BLITAB Technology, which has produced the first tablet for blind users, called BLITAB®. Tsvetanova is the co-inventor of BLITAB, the first tactile tablet for blind and visually impaired people.

This is the fourth edition of the contest, which began in 2011. To be eligible to compete, participants must have founded or co-founded a company before January 2015 with a turnover of at least €100,000, and either they themselves or their companies must have previously benefitted from public or private funding for research and innovation, whatever the source.

At the award ceremony, EU Commissioner Carlos Moedas and Vice-President of the European Parliament Mairead McGuinness announced the four winners of the this year’s EU Prize for Women Innovators.

Moedas, commissioner for Research, Science and Innovation, said, “The winners of this year’s EU Prizes for Women innovators are truly inspiring. Europe needs more women innovators like them, with great ideas and the courage and determination to take risks and succeed.“

“The innovations that the four winners have brought from idea to market are remarkable not only from a business point of view but also because they will benefit and improve the lives of many people in Europe and beyond,” said Moedas.

McGuinness, vice-president of the European Parliament, said, “This prize demonstrates the significant contribution of women innovators in bringing many life-changing innovations to the market. It is very fitting that on this International Women’s Day 2017 we recognize and celebrate their entrepreneurial spirit and achievements.“

“We do so in a very visible way to give inspiration to other women and, in particular, to young women and girls to look towards innovation and entrepreneurship,” McGuinness said.

Following an open call for submissions in autumn 2016, the winners were chosen by a high-level jury of independent experts  from business, venture capital, entrepreneurship and academia.

The other nine women chosen as finalists for the 2017 EU Prize for Women Innovators are also interesting.

Here’s a little more information about the 12 finalists, presented in alphabetical order.

1) Gema Climent is the founder, R&D director and the only administrator of Nesplora technology and behavior. Nesplora is a company funded with the objective of analyzing human behavior using emerging technologies, making it more scientific, functional and objective. It offers a disruptive conception of evaluating human cognition and behavior using standardized and scientifically validated virtual reality scenarios.

2) Barbara Demeneix is professor of Physiology at the Natural History Museum in Paris, where she studies evolution of hormone systems. She invented and brought to market the first method for screening chemicals and environmental samples using genetically-engineered fluorescent embryos. She co-founded WatchFrog, a company marketing biological tests for screening chemicals and assessing water quality. Demeneix was recognized for her mentoring, particularly of young women scientists, with the Nature Mentorship Award, 2011. WatchFrog has participated in six actions that received EU funding from the 7th Framework Programme for Research; two are ongoing.

3) Mary Franzese cofounded Neuron Guard, a start-up that is developing a life-saving medical device for brain damage directly at the site of the event. Having both an economic and communicative soul, she dreams of being “Chief Love Officer” of a company leader in the development of standard of care technologies for Therapeutic Temperature Management, where gender equality and the inclusion act as master. The company has received funding from the Emilia Romagna (Italian Region) Start Up Innovative fund.

4) Dr. Gemma Galdon Clavell is a policy analyst working on the social, ethical and legal impacts of data-intensive technologies. She is the founder and director of Eticas Research and Consulting, a rapidly-growing organization with aninternational presence that brings together social scientists, computer scientists and IT experts to help clients tackle the challenges and opportunities of the data society by building values into the design process. The company has received EU funding from both Horizon 2020 and the 7th Framework Programme for Research.

5) Dr. Claudia Gärtner is a founder of microfluidic ChipShop in Jena, Germany. Microfluidics or “lab-on-a-chip” systems are considered to be the enabling tool for a novel approach to analytics and diagnostics, enabling the production of a wide range of tailored-made products and on-chip applications. In 2002 she was nominated for the German Founders Prize and received the Thuringian award for the best business concept for ChipShop. She leads a wide variety of research projects for the development of lab-on-a-chip systems for life science applications. Microfluidic ChipShop coordinated the EU-funded Multisense Chip project funded by the 7th Framework Programme for Research.

6) África González Fernández is a full professor in Immunology and Director of the Biomedical Research Center (CINBIO) at the University of Vigo in Spain. She is also co-founder of the company NanoImmunoTech, the first European company dealing with biomedical characterisation and synthesis of nanomaterials, bioconjugation and biosensing. NanoImmunoTech has received EU funding under Phase 1 and 2 of the Horizon 2020 SME Instrument, to develop the Heatsens technology.

7) Michela Magas is the founder of Stromatolite, a Design Innovation Lab that has built the Music Tech Fest platform – one of the first real Innovation Ecosystems with a community of over 5,000 innovators. Her ecosystem has yielded multiple innovative products and services enabled by her ideas of Open Product, Market Adoption, and Innovation IP, creating a fast track to innovation. Stromatolite has participated in four projects funded by Horizon 2020 and the 7th Framework Programme for Research, coordinating two of them.

8) Dr. Kamila Markram is a neuroscientist at the École polytechnique fédérale de Lausanne and co-founder and CEO of Frontiers, one of the largest and most influential Open Access publishers in the world. Frontiers is a digital-age scholarly publishing company with a mission to bring Open Access publishing and Open Science IT solutions to academics and the general public. In 2014, Frontiers received the ALPSP Gold Award for Innovation in Publishing. In 2016, Markram was named a L’Hebdo Forum 100 personality, a finalist for the Ernst & Young Entrepreneur of the Year and recipient of the Gold Stevie Award for Women in Business. Frontiers has taken part in one project funded by the 7th Framework Programme for Research, and is participating in two projects funded by Horizon 2020.

9) Sandra Rey co-founded Glowee which develops a biological lighting system that works due to the natural properties of bacteria to revolutionize the way we produce, consume and illuminate. Glowee has received funding from the European Institute of Innovation and Technology (EIT) InnoEnergy programme.

10) Isabel Trillas Gay is full Professor at the Faculty of Biology, Universitat de Barcelona and has co-founded the spin-off Biocontrol Technologies, S.L. for the development of her discovery, a pesticide based on the natural microorganism, Trichoderma asperellum strain T34, to control crop diseases. In Biocontrol Technologies she is partner, member of the direction committee and scientific adviser. In 2016 the company was awarded a Seal of Excellence under Horizon 2020’s SME Instrument Phase I.

11) Kristina Tsvetanova is the co-founder and CEO of BLITAB Technology GmbH – the World’s Most Creative Start-up 2015 and European Winner of Social Entrepreneurship and Disability. She is the co-inventor of the award-winning innovation BLITAB®. Thanks to the international recognition that she has received in Europe, USA, Mexico, Singapore, China and Japan, and her persistance in empowering unprivileged children via technology, Tsvetanova was named as one of the “Social Movers” of today by Agora+D in 2015. Blitab has received EU funding from the 7th Framework Programme for Research’s CREATI-FI calls

12) Petra Wadström, born in Stockholm and mother of four children, is the founder and CEO of Solvatten AB. Solvatten is a portable, durable, highly efficient and easy-to-use way to make water safe and hot, just by harnessing the power of the sun. She is a biochemical research technician but after years of research she turned a passion for art into a career. Being an artist has helped her to think outside the box, combining elements of science and creativity. Solvatten has received EU funding from Phase 1 of Horizon 2020’s SME Instrument.

The aim of the EU Prize for Women Innovators is to raise public awareness of the need for more innovation and more women entrepreneurs, to recognize the success of women in innovation and create strong role models.

Women are underrepresented in terms of creating innovative enterprises. Only 31 percent of entrepreneurs in the European Union are women. Prize organizers say this imbalance between the genders represents an untapped potential for Europe, which needs to use all its human resources to their full potential to remain competitive and find solutions to economic and societal challenges.

Get assistance in building innovation through Maximpact’s Advisory and discover project services and capacity building for all types of business and organizations. Contact us at info(@)maximpact.com and tell us what you need.