Women and Men Give Differently 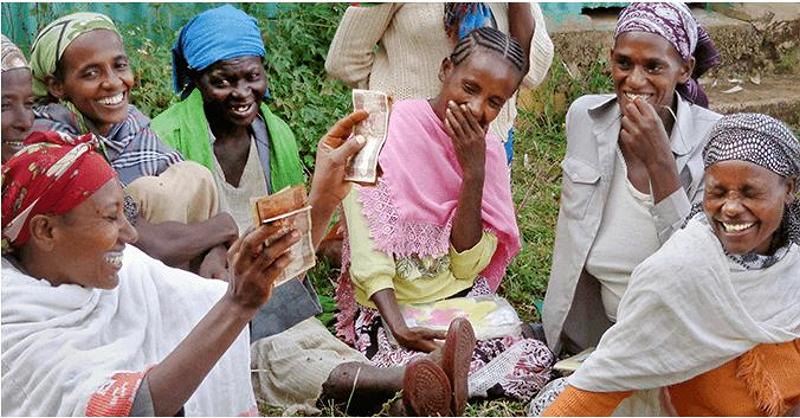 INDIANAPOLIS, Indiana, May 28, 2019 (Maximpact.com News) – When planning campaigns, wise fundraisers take into account the real differences in the ways in which women and men give to charitable organizations. “From motivations to causes to behavior, women and men demonstrate different giving patterns,” finds new research from the Women’s Philanthropy Institute at the Indiana University Lilly Family School of Philanthropy

“While women’s foundations and funds are relatively young, these organizations excel at identifying the needs of women and girls locally, and in turn help create positive change in their communities,” said lead researcher Elizabeth Gillespie, a doctoral candidate at the University of Nebraska Omaha.

Gillespie says the goal of this new research is to demonstrate how women’s foundations and funds create impact, so they can continue to do so for years into the future. 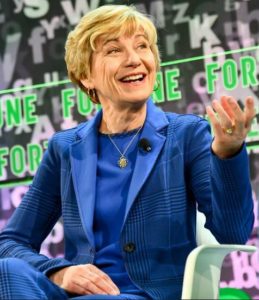 Women’s foundations and funds are a recent development, 71 percent were established between 1990 and 2010, but their giving is substantial.

Women’s Funding Network (WFN) members alone granted over US$400 million to women and girls in 2017, and there are dozens more women’s foundations and funds in the United States that are not members of this international network.

While the number of women’s foundations and funds making grants to programs and organizations benefiting women as a priority have grown over the past 50 years, there are gaps in what is known about these organizations and their work,

The new study builds on a 10-year-old report by The Foundation Center  and the Women’s Funding Network, which produced a overview of women’s funds with a focus on giving to women and girls. This new study provides an update on the growth and activities of women’s foundations and funds in the decade since then.

Funded by the Bill & Melinda Gates Foundation, the study found that 44 percent of the standalone women’s foundations and funds in the sample grew their assets between 2014 and 2016, while 14 percent saw their assets decline.

Annual grant amounts awarded by women’s foundations and funds varied as well, ranging from a low of $2,500 to a high of almost $130 million in 2016.

Although they vary in terms of geographic focus, asset size, average grant size, and grantmaking scope, a majority of the foundations and funds in the study had many elements in common.

In addition, a majority of the foundations and funds surveyed listed as priority funding areas education (63 percent) and economic empowerment as well as security, and self-sufficiency (61 percent). This prioritizing is a key strategy for achieving broader goals such as gender equality.

One Midwest-based interviewee told Gillespie, “We all want [grants] to have impact, but we also have learned that impact can be very hard to measure…Even though the organizations themselves, of course, want to have impact, one of the things we’ve learned and talked about is that sometimes, instead

of trying to measure impact, you just have to look at [whether] things are going in the right direction.” 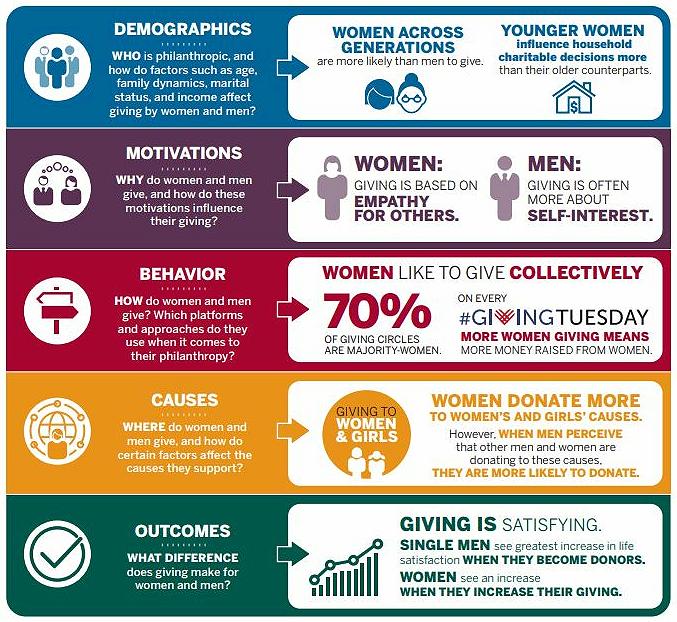 Graphic showing the different ways of charitable giving by women and by men created by The Women’s Philanthropy Institute, 2019. Posted for media use.

Almost two-thirds (64 percent) provided support to their grantees beyond the grant, including resources such as:

Women’s wealth has been on the rise during the past 50 years, and females now own roughly 40 percent of global wealth, research by The Women’s Philanthropy Institute shows, and women are more likely than men to engage in charitable giving.

Gillespie, lead author of the new study, concludes, “Although these organizations tend to be young and small in size, women’s foundations and funds excel at identifying the needs of diverse groups of women and girls and bringing community leaders together to address important issues through

the lenses of gender and social change. As these organizations grow and evolve, we can expect an increased focus on sustainability and impact measurement that refects their long-term commitment to ensuring investments in women and girls continue to have a ripple efect throughout their communities in the coming years.”

Whatever your gender and whatever the precise focus of your nonprofit group, improving your fundraising skills is crucial to the success of your campaigns.

Maximpact offers online Fundraising Masterclasses for nonprofits from anywhere in the world.

Participants learn about the different types and sources of donations, how to assess them and how to choose the best option for their NGO’s projects.

They can improve their understanding of the fundamentals of why and how donors give, and how as fundraisers they can meet donors’ goals.

The participants learn how to approach different donors, how to prepare, how to present and how to follow up on established contacts.

Finally, the online Fundraising Masterclass offers understanding of the most common fundraising challenges and pitfalls and teaches ways to overcome them.