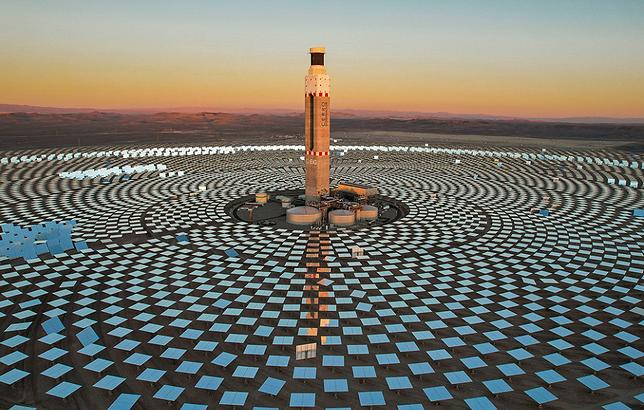 No fossil fuels needed, the Cerro Dominador solar power plant is directly connected to Chile’s National Electric System. The plant is located in the Atacama Desert, the driest desert in the world with the highest levels of direct solar radiation on the planet. The sun’s energy is beamed by 10,600 mirrors to the top of the 250-meter-high tower, where liquid salts are heated to generate steam, which a turbine transforms into energy. June 30, 2021 (Photo by International Montary Fund) Creative Commons license via Flickr

GENEVA, Switzerland, August 12, 2021 (ENS) – Wildfires, drought, floods, extreme weather across the globe – climate change is already here – widespread, rapid and intensifying. Some of the changes now happening, such as sea level rise, are irreversible over hundreds to thousands of years, warns a new report from the Intergovernmental Panel on Climate Change (IPCC), released Monday.

Prepared by 234 scientists from 66 countries, the report concludes that human influence has warmed the climate at a rate that is unprecedented in at least the last 2,000 years.

Dorothy Guerrero, head of policy at the UK nonprofit Global Justice Now, said the report is a “terrifying warning of our future unless drastic action is taken. There is no denying the science of the climate crisis,” she said.

The IPCC Working Group I report, “Climate Change 2021: the Physical Science Basis,” https://www.ipcc.ch/report/ar6/wg1/#SPMwas approved by 195 member governments of the IPCC, through a virtual approval session held over two weeks starting on July 26. This report is the first installment of the IPCC’s Sixth Assessment Report, set for completion next year.

Human-induced climate change is already affecting many weather and climate extremes in every region across the globe, the new report details. Scientists are observing changes across the whole of Earth’s climate system – in the atmosphere, in the oceans, ice floes, and on land.

Global surface temperature has increased faster since 1970 than in any other 50-year period over a least the last 2,000 years. For example, temperatures during the most recent decade (2011–2020) exceed those of the most recent multi-century warm period, around 6,500 years ago, the report indicates.

Meanwhile, the global mean sea level has risen faster since 1900 than over any preceding century in at least the last 3,000 years.

UN Secretary-General António Guterres warned sternly that the IPCC report is nothing less than “a code red for humanity.”

“The alarm bells are deafening, and the evidence is irrefutable,” he stressed.

In a hospital setting Code Red means there’s a fire in the hospital or an external disaster with casualties arriving at the facility.

The climate crisis is parallel. The IPCC report warns that the Earth is on fire, and the casualties from this disaster need medical help.

“We are at imminent risk of hitting 1.5 degrees in the near term,” he said. “The only way to prevent exceeding this threshold, is by urgently stepping up our efforts, and persuing the most ambitious path. We must act decisively now, to keep 1.5 alive.”

The UN chief said that solutions are well known. “Inclusive and green economies, prosperity, cleaner air and better health are possible for all, if we respond to this crisis with solidarity and courage,” he said.

Ahead of the crucial United Nations COP26 climate conference in Glasgow, Scotland in November, all nations, especially the advanced G20 economies, need to join the net-zero emissions coalition, and reinforce their promises on slowing down and reversing global heating, “with credible, concrete, and enhanced Nationally Determined Contributions” that lay out detailed steps,” said Gutteres.

Unless rapid and deep reductions in carbon dioxide and other greenhouse gas emissions occur in the coming decades, the report warns that achieving the goals of the 2015 Paris Agreement “will be beyond reach.”

Helen Mountford, vice president, climate and economics, World Resources Institute, said, “If this IPCC report doesn’t shock you into action, it should. The report paints a very sobering picture of the unforgiving, unimaginable world we have in store if our addiction to burning fossil fuels and destroying forests continues. One of the most striking takeaways is that we may reach 1.5°C of warming a decade earlier than the IPCC had previously found.”

The IPCC scientists reveal that human activities affect all major climate system components, with some responding over decades and others over centuries.

Scientists also point out that evidence of observed changes in extremes such as heatwaves, heavy precipitation, droughts, and tropical cyclones, and their attribution to human influence, has strengthened.

They say that many changes in the climate system become larger in direct relation to increasing global warming – increases in the frequency and intensity of heat extremes, marine heatwaves, and heavy precipitation; agricultural and ecological droughts in some regions; the proportion of intense tropical cyclones; as well as reductions in Arctic sea ice, snow cover and permafrost.

The report makes clear that while natural drivers will modulate human-caused changes, especially at regional levels and in the near term, they will have little effect on long-term global warming.

The IPCC scientists project that in the coming decades climate changes will increase in all regions.

For 1.5°C of global warming, there will be increasing heat waves, longer warm seasons and shorter cold seasons.

At 2°C of global warming, heat extremes are more likely to reach critical tolerance thresholds for agriculture and health.

But it won’t be just about temperature, the IPCC explains. Climate change is intensifying the natural production of water – the water cycle. This brings more intense rainfall and flooding, as well as more intense drought in many regions. 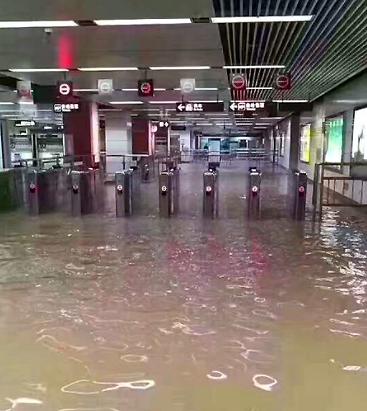 It is also affecting rainfall patterns. In high latitudes, precipitation is likely to increase, while it is projected to decrease over large parts of the subtropics. Changes to monsoon rain patterns are expected, which will vary by region.

The IPCC experts warn that for cities, some aspects of climate change may be magnified, such as heat, flooding from heavy precipitation events, and sea level rise in coastal cities.

Extreme sea level events that previously occurred once in 100 years could happen every year by the end of this century, the report warns.

Further warming is expected to amplify permafrost thawing, and the loss of seasonal snow cover, melting of glaciers and ice sheets, and loss of summer Arctic sea ice.

Changes to the ocean, including warming, more frequent marine heatwaves, ocean acidification, and reduced oxygen levels, affecting both ocean ecosystems and the people that rely on them, will continue throughout at least the rest of this century.

“As citizens and as businesses and as governments, we are well aware of the drama,” Andersen said. “The drama exists, we have seen it and we heard about it in every news bulletin. And that’s what we need to understand, that the expression of what the science says is exhibited before our very eyes.”

“Of course,” said Andersen, “what this excellent report does is, it projects those scenarios outward, and tells us, if we do not take action, what could be the potential outcomes, or if we do take action, what will be a very good outcome.”

Apart from the urgent need for climate mitigation, “it is essential to pay attention to climate adaptation,” said Peteri Taalas, executive director of the World Meteorological Organization “since the negative trend in climate will continue for decades and in some cases for thousands of years.”

“One powerful way to adapt is to invest in early warning, climate and water services,” he said.”Only half of the 193 members of WMO have such services in place, which means more human and economic losses. We have also severe gaps in weather and hydrological observing networks in Africa, some parts of Latin America and in Pacific and Caribbean island states, which has a major negative impact on the accuracy of weather forecasts in those areas, but also worldwide.

“The message of the IPCC report is crystal clear: we have to raise the ambition level of mitigation,” Taalas said.

The report explains that from a physical science perspective, limiting human-induced global warming to a specific level requires limiting cumulative CO2 emissions, reaching at least net-zero CO2 emissions, along with strong reductions in emissions of other greenhouse gases.

The Intergovernmental Panel on Climate Change, IPCC, is the United Nations body for assessing the science related to climate change. It was established by the United Nations Environment Programme and the World Meteorological Organization in 1988 to provide political leaders with periodic scientific assessments concerning climate change, its implications and risks, as well as adaptation and mitigation strategies. It has 195 member states.