World’s Forests Going Up in Smoke 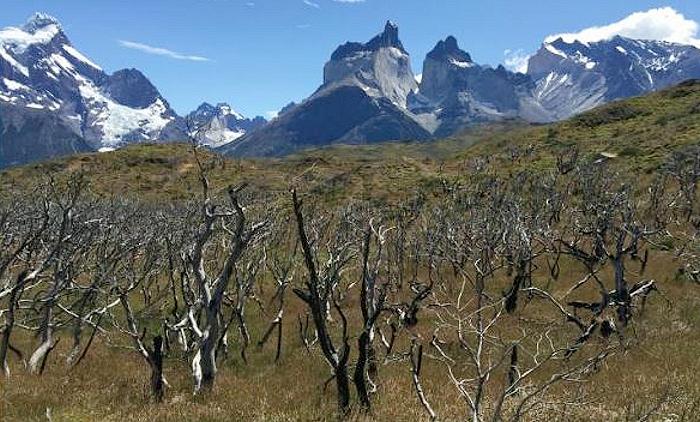 A forest of Nothofagus antarctica trees burned in a fire that covered 40,000 acres in Torres del Paine National Park, Chile in 2012. (Photo by Dave McWethy) Posted for media use

CONCEPCION, Chile, August 23, 2018 (Maximpact.com News) – Chile has replaced many of its native forests with plantation forests to supply pulp and timber mills that produce paper and wood products. As a result, highly flammable non-native pine and eucalypt forests now cover the region.

Eucalypt trees, which are native to Australia, and pine trees native to the United States contain oils and resins in their leaves that, when dry, can easily ignite.

Researchers have discovered some reasons why massive fires continue to burn through south-central Chile. Their results were published August 22, in “PLOS ONE,” an online scientific journal published by the Public Library of Science.

Lead author Dave McWethy, an assistant professor in Montana State University’s Department of Earth Sciences, received a Fulbright grant that sent him to Chile from 2015-2016 to research the wildfires and teach at the University of Concepcion.

Besides low humidity, high winds and extreme temperatures – some of the same factors contributing to fires raging elsewhere in the world – central Chile is experiencing a mega-drought and large portions of its diverse native forests have been converted to more flammable tree plantations, the researchers said.

Co-author Anibal Pauchard, professor at the University of Concepcion and researcher at the Institute of Ecology and Biodiversity in Chile, said wildfires have been a part of the Chilean landscape for centuries, but they have grown larger and more intense in recent decades, despite costly government efforts to control them.

In 2016-2017 alone, fires burned nearly 1.5 million acres of Chilean forests, almost twice the area of the U.S. state of Rhode Island. It was the largest area burned during a single fire season since detailed recordkeeping began in the early 1960s.

The devastation prompted the Chilean government to ask what land-use policies and environmental factors were behind these fires, McWethy said. That led to a national debate about preventing and reducing the consequences of future fires.

To better understand the Chilean fires, the researchers compared satellite information with records from the Chilean Forest Service for 2001 through 2017. They studied eight types of vegetation, climate conditions, elevation, slope and population density across a wide range of latitudes in Chile.

“Now we have compelling evidence that after climate, landscape composition is crucial in determining fire regimes. In particular, exotic forest plantations need to be managed to purposely reduce fire hazard,” Pauchard said. “Which forestry species we plant and how we manage them matters in terms of fire frequency and intensity.”

“Protecting and restoring native forests would likely buffer the negative impacts of fires that are projected to continue to increase into the future,” McWethy said, but that will be difficult to do. “So much of the landscape has changed in south-central Chile,” he said, “that it’s going to be difficult to restore,” 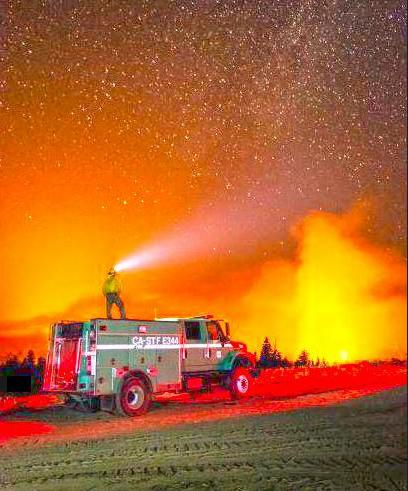 Rising average temperatures have led to forests in Western North America drying out, increasing the risk of fires.

There are 129 million dead trees in California alone. Across California, the total number of fires is trending downward, but the size of fires is going up.

The West Coast of the United States is shrouded in smoke. Currently, more than two million acres have burned in 111 large fires in 13 states. Over 1.9 million acres (768,900 hectares) are or have been ablaze.

Six new large fires were reported in Idaho, Nevada and Oregon over the weekend and eight large fires have been contained, including the Ferguson Fire near Yosemite National Park in California.

The weather concerns in the area include warmer than average temperatures that will continue in the west with daily winds and overnight humidity recoveries that are just marginal.

The Province of British Columbia on Canada’s West Coast has declared a state of emergency as thousands of firefighters battle more than 560 wildfires.

Fifty-eight large wildfires are destroying forests across the province, filling the skies with smoke. Overall, 565 fires are threatening more than 20,000 people who are on evacuation alert or under evacuation order.

“We’re going to throw everything we’ve got at these fires, but in a lot of cases, Mother Nature is going to be in the driver’s seat,” Kevin Skrepnek, the province’s chief fire information officer, told reporters.

Prime Minister Justin Trudeau will meet with first responders and British Columbians displaced by the wildfires on Thursday.

Trudeau met with B.C. Premier John Horgan in the British Columbia town of Nanaimo late Tuesday afternoon, ahead of a retreat with his newly-shuffled cabinet.

“Our thoughts are with the first responders, the firefighters and the residents who are struggling through the wildfires that are raging across the province,” Trudeau said.

In eastern Canada, firefighters from across the continent, from Wisconsin and Mexico are assisting Ontario forest firefighters in their battles with one of the worst fire seasons on record.

The Ministry of Natural Resources and Forestry reports 1,108 fires across Ontario this year, compared to 618 in 2017. The 10-year average is 643 fires in the province.

England’s peatland moors, Ireland, Sweden, Scandinavia and even areas north of the Arctic Circle experienced major fires over the past two months.

At least 15 EU countries have experienced more wildfires than usual for this time of year, according to figures from the European Forest Fire Information System.

The number of wildfires ravaging Europe this year is 43 percent higher than the average for the last 10 years.

Several European countries are in the grip of unprecedented wildfires. While the deadly fires in Greece now are under control, dozens of fires are blazing across Turkey, Italy and Cyprus.

With Europe in the grip of a heatwave and with little rain to ease the drought, fires have now broken out as far north as the Arctic Circle, in Sweden.

An estimated 50 fires are now burning in Sweden. Through July there were three times as many fires during this period as last year.

Jonas Olsson from the Swedish Meteorological and Hydrological Institute said, “It’s very, very dry in most of Sweden. The flows in the rivers and lakes are exceptionally low, except in the very northern part of the country. We have water shortages.”

“Rainfall has only been around a seventh of the normal amount, the lowest since record-keeping began in the late 19th century,” Olsson said.

European Commissioner for Humanitarian Aid and Crisis Management Christos Stylianides said, “The devastating forest fires in Sweden have highlighted once again the impact of climate change and that we are facing a new reality.”

The number of forest fires in the European Union more than doubled from 2016 to 2017, figures obtained by Euronews show. Experts blame climate change for the increase, saying it has lengthened the traditional wildfire season and raised the frequency of fires.

There were 1,671 blazes in 2017, a huge increase over the 639 the EU saw annually on average during the previous eight years.

This year, fires have already affected an estimated area of more than 90,000 hectares in Siberia and the Russian Far East.

Lakes in Yakutia were still frozen at the end of May, but that ice has been replaced by fire after persistent heat over Siberia.

For example, on July 29, a total of 66 wildfires covering an area of 14,888 hectares were put out over 24 hours across Russia, the press service of the Federal Aerial Forest Fire Service (FAFFS) reported.

The hardest hit by wildfires were the Krasnoyarsk Region and Yakutia, where 39,600 and 21,000 hectares of woodland respectively were engulfed in flames. About 3,200 hectares were hit by wildfires in the Magadan region, and more than 2,300 in the Irkutsk region.

These fires were not put out as the firefighting expenses exceed the forecasted damage, FAFFS stated.

The northern part of the world is warming faster than the planet as a whole, says the World Meteorological Organization. That heat is drying out forests and making them more susceptible to burning. A recent study found Earth’s boreal forests are now burning at a rate unseen in at least 10,000 years.