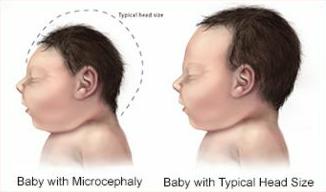 Microcephaly is a birth defect where a baby’s head is smaller than expected when compared to babies of the same sex and age. Babies with microcephaly often have smaller brains that might not have developed properly. (Drawings courtesy Centers for Disease Control and Prevention) Public domain.

GENEVA, Switzerland, February 2, 2016 (Maximpact.com News) – The head of the World Health Organization Monday declared the spread of the Zika virus to 24 countries in the Americas “a public health emergency of international concern.”

Zika is a mosquito-borne virus that is new to the Americas. Since Brazil reported the first cases of local transmission of the virus in May 2015, it has spread within Brazil and to 23 other countries and territories in the region.

The World Health Organization (WHO) estimates that four million people could be affected by the Zika virus over the next 12 months.

Arrival of the virus in Brazil its spread across the Americas has been associated with a steep increase in the birth of babies with abnormally small heads and incomplete brain development, a condition called microcephaly.

The Brazilian government has confirmed that the Zika virus infection in pregnant women can cause microcephaly in the fetus, but not every pregnant woman who is infected will have the baby with a small head.

Also associated with Zika infection is an increase in cases of Guillain-Barré syndrome, a poorly understood condition in which the immune system attacks the nervous system, sometimes resulting in paralysis.

“A causal relationship between Zika virus infection and birth defects and neurological syndromes has not been established, but is strongly suspected,” says the WHO.

WHO Director-General Dr. Margaret Chan Monday convened an Emergency Committee meeting of 18 experts and advisers via teleconference to gather advice on the severity of the health threat associated with the continuing spread of Zika virus disease in Latin America and the Caribbean.

Acting on the advice of the Emergency Committee, Dr. Chan Monday declared that the recent cluster of microcephaly cases and other neurological disorders reported in Brazil, following a similar cluster in French Polynesia in 2014, constitutes “a Public Health Emergency of International Concern.”

No vaccines exist to prevent infection with the virus. It is spread by the Aedes aegypti mosquito, which also spreads dengue fever. There are no specific treatments or rapid diagnostic tests for Zika.

Dr. Chan said WHO will prioritize the development of vaccines and new tools to control mosquito populations, as well as improving diagnostic tests.

“A coordinated international response is needed to improve surveillance, the detection of infections, congenital malformations, and neurological complications, to intensify the control of mosquito populations, and to expedite the development of diagnostic tests and vaccines to protect people at risk, especially during pregnancy,” she said.

At present, the most important protective measures are the control of mosquito populations and the prevention of mosquito bites in at-risk individuals, especially pregnant women.

“The Zika virus was first isolated in 1947 from a monkey in the Zika forest of Uganda. Its historical home has been in a narrow equatorial belt stretching across Africa and into equatorial Asia,” Dr. Chan told the WHO Executive Board in a January 28 briefing.

In 2007, Zika expanded its geographical range to cause the first documented outbreak in the Pacific islands, in the Federated States of Micronesia. From 2013-2014, four additional Pacific island nations documented large Zika outbreaks.

“The situation today is dramatically different,” said Dr. Chan. “Last year, the virus was detected in the Americas, where it is now spreading explosively. As of today, cases have been reported in 23 countries and territories in the region. The level of alarm is extremely high.”

WHO is “deeply concerned” about this rapidly evolving situation, in part because conditions associated with this year’s El Nino weather pattern are expected to greatly increase mosquito populations in many areas.

PAHO anticipates that Zika virus will continue to spread and will likely reach all countries and territories of the region where Aedes mosquitoes are found.

Yet, the Emergency Committee found no public health justification for restrictions on travel or trade to prevent the spread of the Zika virus.

Only about one in five people infected with the Zika virus will feel sick. In those that do, symptoms are usually mild and can include fever, rash, joint pain and red eye.

The role of Aedes mosquitoes in transmitting Zika is documented and well understood, while evidence about other transmission routes is limited, says the Pan American Health Organization (PAHO), the regional office of the World Health Organization for the Americas.

Zika has been isolated in human semen, and one case of possible person-to-person sexual transmission has been described. However, says PAHO, more evidence is needed to confirm whether sexual contact is a means of Zika transmission.

Zika can be transmitted through blood, but this is an infrequent mechanism. Standard precautions that are already in place for ensuring safe blood donations and transfusions should be followed, PAHO advises.

Evidence on mother-to-child transmission of Zika during pregnancy or childbirth is also limited. Research is currently under way to generate more evidence regarding perinatal transmission and to better understand how the virus affects babies.

There is currently no evidence that Zika can be transmitted to babies through breast milk.

In the coming weeks, the World Health Organization will convene experts to address critical gaps in scientific knowledge about the virus and its potential effects on fetuses, children and adults.

In Brazil the number of Zika infections is estimated to top 1.3 million cases, according to the medical journal “The Lancet.”

President Dilma Rousseff will broadcast a plea to all Brazilians to wipe out the Aedes mosquito in a video recorded Monday for broadcast nationwide on Wednesday.

Presidential Chief of Staff Jacques Wagner said Monday that “there is the possibility of cancellation of the Olympics in August because of the seriousness of the problem.”

In the United States, President Barack Obama is taking steps to warn the American people and help them to protect themselves.

The U.S. mainland does have Aedes species mosquitoes that can become infected with and spread Zika virus. U.S. travelers who visit a country where Zika is found could become infected if bitten by a mosquito.

In a meeting with Director of the Centers for Disease Control and Prevention, Dr. Thomas Frieden, and other health and national security advisors, Obama emphasized the need to accelerate research efforts on diagnostic tests, to develop vaccines and therapeutics, and to ensure that all Americans have information about the Zika virus and steps they can take to better protect themselves.

Mosquito populations should be reduced and controlled by eliminating breeding sites, authorities advise. Containers that can hold even small amounts of water where mosquitoes can breed, such as buckets, flower pots or tires, should be emptied, cleaned or covered to prevent mosquitoes from breeding in them. Larvicide can be used to treat standing waters.

All people living in or visiting areas with Aedes mosquitoes should protect themselves from mosquito bites by using insect repellent; wearing clothes that cover as much of the body as possible; using physical barriers such as screens, closed doors and windows; and sleeping under mosquito nets, especially during the day when Aedes mosquitoes are most active.