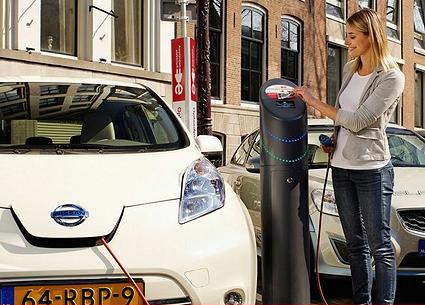 PALO ALTO, California, April 14, 2016 (Maximpact.com News) – Luxury electric automaker Tesla unveiled its latest model at a March 31 event, and demand was so strong for the $35,000 Tesla Model 3 that within the week 325,000 would-be customers purchased preorders at US$1,000 each.

The preorder offering raised US$14 billion, tweeted Tesla founder, chairman, CEO and product architect Elon Musk. He will use funds to finish building an enormous lithium-ion battery factory near Reno, Nevada and begin Model 3 production at the Tesla assembly plant in Fremont, California.

Everyone will have to be patient though – production of the Model 3 is not scheduled to begin until the second half of 2017.

The sheer number of Model 3 orders amazed many people including “EV World” publisher Bill Moore, who wrote to his newsletter subscribers, “The market’s not only ‘spoken,’ it bloody ROARED.”

“Fifteen years ago, some three years after I launched EV World,” wrote Moore, “there were maybe 5,000 OEM-built electric cars on the road in the United States; and roughly a comparable number in Europe, mainly in France.”

Now, he compared, “In just seven days time, Tesla now has pre-orders and $1000 deposits for more than 30 times the number of all the electric cars in the world back just over a decade and a half ago.”

As of March 31, Tesla Motors had sold nearly 125,000 electric cars worldwide since delivery of its first Tesla Roadster in 2008.

The 250,000th owner is Yves Nivelle, a computer engineer from Bordeaux, who traded in his 21-year-old diesel car for the subcompact Renault ZOE.

Nivelle bought his EV after the French government introduced an environmental bonus in April 2015 to allow owners of older, polluting diesel cars to trade them in and get a rebate of €10,000 on a new electric vehicle.

“The government’s environmental bonus was a big factor in my decision to get an EV,” Nivelle said. “But I have to say, I was convinced the first time I drove the car. It’s a real pleasure to drive and it feels good to do my part for the environment.”

Watch a video  of Nivelle getting into his historic Renault ZOE at the dealership.

In addition to the LEAF, Nissan also makes the e-NV200 van, which has been on sale in Europe and Japan since 2014. In addition to the ZOE, Renault also sells the Renault Kangoo Z.E van, the SM3 Z.E. sedan and the Twizy, a two-seater urban commuter vehicle.

“Demand for our electric vehicles continues to grow thanks to government incentives and the expanding charging infrastructure,” said Carlos Ghosn, chairman and CEO of the Renault-Nissan Alliance, formed in 1999.

“The positive response of our customers is also driving demand. These vehicles enjoy some of the highest levels of satisfaction rates from our customers around the world,” Ghosn said.

As public fast-charging infrastructure proliferates so that a nearly full charge is possible in less than half an hour at many locations, and electric vehicle batteries offer ranges up to 250 miles on a single charge, public acceptance of EVs grows stronger.

An all-electric vehicle offering more than 200 miles of range per charge for an affordable price in the neighborhood of US$30,000 – that’s what a growing segment of the driving public wants and an increasing number of automakers are answering that demand.

There are more than 20 models of electric vehicles on the market today, including, among others, the Chinese BYD e6, the Chevrolet Spark EV, Fiat 500e, Kia Soul EV, India’s Mahindra Reva e2o, all Mercedes B-class cars, the Mitsubishi i-MiEV, the Smart EV, Volvo’s XC90 T8 and the VW e-Golf.

Across the industry, at least 24 newly announced electric vehicle models are expected to be on the market before 2019.

General Motors will have the 2017 Chevrolet Bolt EV for sale late this year; it offers 200 miles of range for about $30,000 after the federal government rebate.

GM head Mary Barra believes a real “revolution” is underway. She told the World Economic Forum annual meeting in January that soon petrol-fueled cars will be “a thing of the past.”

“In the auto industry, the revolution is being driven by the convergence of connectivity, electrification and changing customer needs,” Barra said. “It is allowing automakers like GM to develop dramatically cleaner, safer, smarter and more energy-efficient vehicles for customers in every market around the world.”

Ford delivered its first Focus E in 2011, but now has fallen behind. The 2017 Ford Focus Electric will have just 100 miles of range, according a Ford media presentation in Dearborn, Michigan last December.

But Ford will add DC fast charging to the car, so it can recharge to 80 percent of battery capacity in 30 minutes at a growing network of Combined Charging System sites in the USA and Europe.

Many other companies are jumping into the strengthening EV market.

At the 2016 Geneva International Motor Show, Hyundai Motor introduced the IONIQ – the world’s first model with three distinct electrified powertrains: the IONIQ Hybrid, the IONIQ Plug-in and the IONIQ Electric.

Production of the first all-electric SUV from Audi will begin in Brussels in 2018, the company says. It will offer a range of more than 250 miles on a single charge. In a decade, the company projects, 25 percent of Audi’s sales will be electric vehicles.

As production increases, the market grows, especially in India and China.

India’s Minister of State for Power, Coal, and New and Renewable Energy Piyush Goyal wants to make every car on India’s roads an electric vehicle by 2030.

“We have created a working group under the leadership of Road Transport and Highways Minister Nitin Gadkari, who is good at coming up with large scale programs. Environment Minister Prakash Javadekar, Petroleum Minister Dharmendra Pradhan, and I are members of this group,” Goyal told a conference of Indian youth in late March.

Goyal suggested that drivers could buy bare bones electric cars with no money down. The buyers could pay for their EVs over time from the savings realized by not having to purchase fuel.

In China, electric car sales surged to 220,000 in 2015, surpassing the United States to rank first worldwide, according to the China Association of Automobile Manufacturers.

BYD, which stands for Build Your Dream, sold more EVs than any other Chinese company in 2015. CAAM projects sales of 300,000 EVs in China this year.

“Why are we doing this? Why are we making electric cars? Why does it matter?” he asked.

“It’s very important to accelerate the transition to sustainable transport. It’s really important for the future of the world,” he answered his own question.

Musk is concerned about climate change. He pointed to the record high CO2 concentration in the atmosphere: as of March 2016 – 403.5 parts per million – and climbing.

“The last time there was this concentration of CO2 in the atmosphere was 11 million years ago, when primates first started walking upright,” he told the crowd at the unveiling event, many of them owners of earlier and much more costly Teslas.

Tesla founder, chairman and CEO at the unveiling of the Tesla Model 3. (From video courtesy Tesla Motors)

Musk pointed to the Earth’s steadily rising temperature. He pointed to the fact that 53,000 people a year die in the United States alone from exposure to automobile emissions.

Musk is not alone in his concerns. And research shows that the growing popularity of electric vehicles can indeed help avert climate change.

The report, “Environmental Assessment of a Full Electric Transportation Portfolio,” projects emissions through 2050 and air quality impacts in 2030.

It finds that greenhouse gas emissions from light-duty vehicles could drop as much as 64 percent below today’s levels as drivers abandon internal combustion engines in favor of electrics.

“This research points to the importance of two fundamental and parallel trends in energy and the environment,” said EPRI President and CEO Mike Howard. “First is the continuing decarbonization of the electricity sector and second is the electrification of energy use in transportation and industry.”