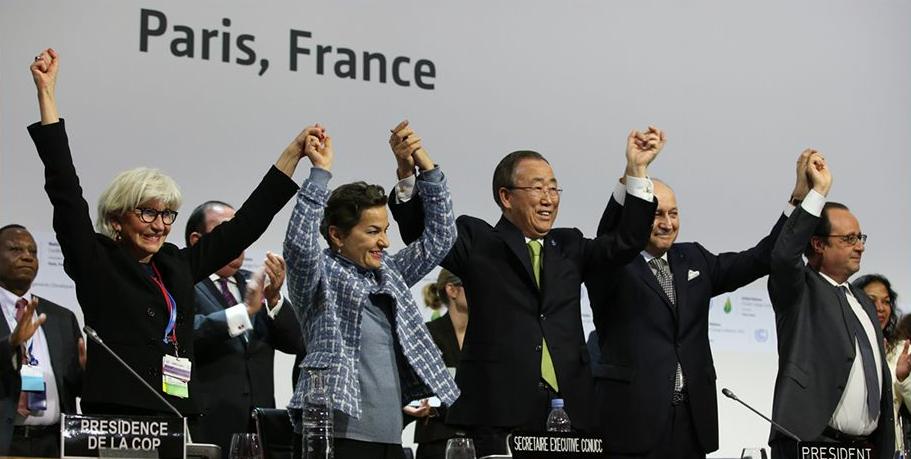 “We have solid results on all key points,” said Ban. “The agreement demonstrates solidarity. It is ambitious, flexible, credible and durable.”

The Paris Climate Agreement is not a formal treaty. It doesn’t contain legally-binding carbon targets. Instead, each country has put forth its own voluntary proposals for ambitious carbon reductions.

The Paris agreement is built on these Intended Nationally Determined Contributions (INDCs) submitted by 187 countries in advance of COP21. The remaining countries are encouraged to issue their INDCs.

The proposals made to date will, at best, take the world about halfway to the target of 2 degrees Celsius or 3.6 degrees Fahrenheit, above pre-industrial temperatures.

World leaders agreed on the 2 degree goal at the UN climate conference in 2009, confirmed it in 2010, and enshrined in the Paris Climate Agreement on December 12.

But although commitments made under the Paris Agreement don’t meet the target goal, most stakeholders view the document as an effective instrument that will at least begin to limit the greenhouse gases responsible for planetary warming.

For one thing, the Parties put in language that requires them to work toward holding the increase to 1.5 degrees C, or 2.7 degrees F.

Scientists agree that we must hold total warming below 2 degrees to avoid dangerous climate change. Yet even at that level, island and coastal communities would be at risk of inundation by rising seas.

To date, average global temperatures have risen by about one degree Celsius, or 1.8 degrees F higher than 150 years ago. Most of the warming has happened in the past 50 years.

To approach the lower 1.5 degree target, the agreement calls on nations to assess their progress every two years. They agreed to come back together five years from now to build on those gains by setting even lower goals going forward.

Gaveling the agreement in with a green hammer Saturday evening, Laurent Fabius, COP21 president and the French foreign minister, announced the historic news – a moment greeted with loud applause and cheers, as the delegates rose in a standing ovation.

The jubilation followed two weeks of round-the-clock negotiations at the 21st Conference of the Parties to the United Nations Framework Convention on Climate Change (COP21) and years of preliminary talks that finally bore fruit.

“I have been attending many difficult multilateral negotiations, but by any standard, by far, this negotiation … is the most important for humanity,” Ban said in the tense hours before agreement was reached.

The toughest outstanding issues – the target temperature limit, climate financing, and the differing roles for developed and developing countries – were resolved at last, if only with agreement to do more in the future.

For the first time, countries must take inventory of their major sources of greenhouse gas pollution and share that information with the rest of the world.

Ban said that enforcement of the agreement will depend on the will power of the Parties to adhere to it.

“Governments have agreed to binding, robust, transparent rules of the road to ensure that all countries do what they have agreed across a range of issues,” he explained.

Highlighting the role of the private sector, the UN chief said business leaders came to Paris in unprecedented numbers and that “powerful” clean energy solutions are already available, while many more are to come.

“With these elements in place, markets now have the clear signal they need to unleash the full force of human ingenuity and scale up investments that will generate low-emissions, resilient growth,” said Ban.

The agreement supports the global transition to a low-carbon economy.

The fossil fuels – coal, gas and oil – that are driving global climate change account for roughly 80 percent of world energy use.

But that is changing quickly.

Financial experts estimate that $50 trillion will be invested in the global energy system over the next 20 years, much of it in clean, renewable energy like wind and solar and to systems to distribute and store the electricity generated.

In the United States, General Motors, Apple computers, Google, Walmart and 150 other major American companies have pledged to reduce their carbon footprint, invest in clean energy and otherwise work toward sustainable practices in a private effort to fight climate change.

The Bank of America, Goldman Sachs and Citigroup have said they would invest a minimum of $325 billion in clean energy technologies over the next 10 years.

The United States, France and 17 other countries that together account for 80 percent of global research and development in clean energy technologies have promised to double that investment over the next five years.

And Bill Gates of Microsoft, Mark Zuckerberg of Facebook, Jeff Bezos of Amazon.com and 25 other billionaire investors are creating a private-public initiative to help bring clean energy ideas to market.

Still, World Coal Association Chief Executive Benjamin Sporton is confident that coal will be burned for many decades to come and that carbon capture and storage (CCS) will help keep climate change under control.

“The foundation of this Paris Agreement are the Intended Nationally Determined Contributions submitted by countries in the lead-up to COP21,” said Sporton. “Countries must be supported in the implementation of their INDCs, which for many include a role for low emission coal technologies, such as high efficiency low emissions coal and carbon capture and storage (CCS).”

Taking all the INDCs into account, the International Energy Agency projects that electricity generation from coal would grow by 24 percent by 2040.

Sporton sees carbon capture and storage as the way of the future. “The increased ambition of this agreement underscores the need to speed up efforts to deploy carbon capture and storage. We call on governments to move quickly to support increased investment in CCS and through providing policy parity for CCS alongside other low emission technologies.”

The Paris Climate Agreement will take effect in 2020. The document will be deposited at the UN in New York and be opened for one year for signature on April 22, 2016 Earth Day.

The agreement will enter into force after 55 countries that account for at least 55 percent of global emissions have deposited their instruments of ratification, a standard UN percentage.

Historically, the international political response to climate change began with the adoption of the UNFCCC on May 9, 1992.

The UNFCCC sets out a framework for action aimed at stabilizing atmospheric concentrations of greenhouse gases to avoid “dangerous anthropogenic interference” with the climate system. The UNFCCC entered into force on March 21, 1994, and now has 196 parties.

Now the Paris Climate Agreement will take its place in history.

“When historians look back on this day, they will say that global cooperation to secure a future safe from climate change took a dramatic new turn here in Paris,” Ban said Saturday. “Today, we can look into the eyes of our children and grandchildren, and we can finally say, tell them that we have joined hands to bequeath a more habitable world to them and to future generations.”

“For today, congratulations again on a job well done,” Ban smiled. “Let us work together, with renewed commitment, to make this a better world.”

One thought on “Global Climate Consensus Forged in Paris”