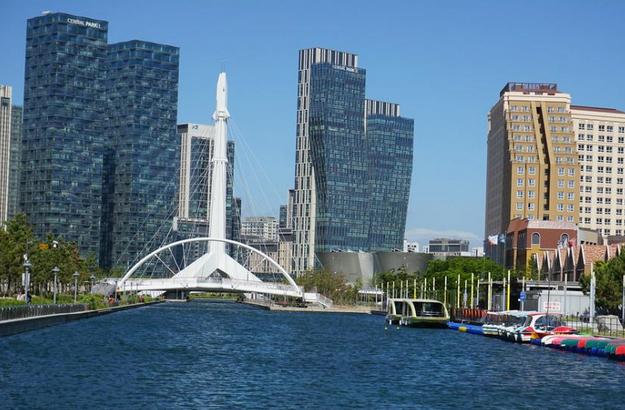 A few of the innovative towers of Songdo, South Korea around Songdo Central Park. May 20, 2019 (Photo by Jaehyuk Lee) Creative commons license via Flickr

In environmentally conscious Songdo, garbage trucks are virtually nonexistent. The city has built-in pneumatic tubes that send trash straight from homes to an underground waste facility, where it’s sorted, recycled, or burned for energy generation.

Planned around a central park, Songdo is designed so that every resident can walk to work. For wider travel there are charging stations for electric cars. A water-recycling system prevents clean drinking water being used to flush office toilets.

The clean, smart city is the ideal home for the new Green Climate Fund, which has its offices there.

The Green Climate Fund (GCF) was formally established during the 2010 United Nations Climate Change Conference in Cancun, Mexico as a fund within the UN Framework Convention on Climate Change (UNFCCC).

Its governing instrument was adopted at the 2011 UN Climate Change Conference in Durban, South Africa.

Now, nearly eight years later, the Green Climate Fund has allocated over US$5.2 billion to 111 climate projects in 99 countries.

The fund partners with 84 organizations that include commercial and development banks, state agencies and civil society groups, which pilot and execute innovative approaches to climate programmes.

President Obama committed the United States to contributing US$3 billion to the fund. In January 2017, in his final three days in office, Obama initiated the transfer of a second $500 million installment to the fund and then left office, leaving $2 billion owing.

U.S. President Donald Trump in his June 1, 2017 announcement of U.S. withdrawal from the Paris Agreement, criticized the Green Climate Fund, calling it a scheme to redistribute wealth from rich to poor countries. So, the United States has not kept up its funding promise.

Still, the GCF is giving grants to developing countries to help them ease the pain of climate change. For example, the 23rd GCF Board meeting approved these eight projects and programmes:

REDD+ is a process moderated by the UNFCCC which supports countries’ efforts to reduce emissions from deforestation and forest degradation, and foster conservation, sustainable management of forests, and enhancement of forest carbon stocks. 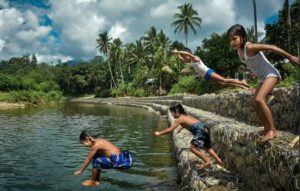 Children have a swim in a protected forested area in Dusunbaru, Jambi, Indonesia that is part of the REDD+ Safeguards and Benefit Sharing Project. May 11, 2017 (Photo by Icaro Cooke Vieira courtesy CIFOR) Creative Commons license via Flickr

Green Climate Fund support for REDD+ includes support for forests as part of a wider landscape that includes increasing resilience and enhancing livelihoods of the most vulnerable people, communities, and regions. Increasing people’s health and well-being is an important part of it, as is enhancing food and water security, and improving the resilience of ecosystems and ecosystem services.

US$23.1 million for TWENDE – Towards Ending Drought Emergencies: Ecosystem-Based Adaptation in Kenya’s Arid and Semi-Arid Rangelands with the International Union for the Conservation of Nature (IUCN)

It All Depends on Replenishment

Today, the Green Climate Fund is seeking contributions for its first replenishment, to strengthen its role as the world’s largest dedicated fund assisting developing countries to cope with the changing climate. Hosted by France, the Pledging Conference is taking place in Paris October 24-25.

GCF needs to replenish its funds after nearly exhausting the USD 7 billion it received from contributors since approving its first climate change project in 2015.

Earlier announcements of national support have laid the groundwork for a successful replenishment.

The GCF announced that in the weeks leading up to the conference, 16 countries expressed their intention to contribute to the next four years of GCF operations from 2020 to 2023, with a total value of US$7.4 billion.

Over 90 percent of pledges announced to date represent an increase over the contributions made during GCF’s initial resource mobilization period from 2014 to 2019, with nearly half doubling their national currency contributions.

So far, Norway, Germany, the United Kingdom and France have announced a doubling of their initial contributions, with Canada maintaining its contribution. Seven countries have pledged in the billions, while dozens of others are contributing smaller amounts. Click here to see the complete list.

One of the most controversial things about the Green Climate Fund is the way executives have reached out to the private sector.  Several developing countries and nongovernmental organizations have suggested that the fund’s Private Sector Facility should focus on “pro-poor climate finance” that addresses the difficulties faced by micro, small, and medium-sized enterprises in developing countries.

From October 8 to 10, the fund hosted its second global gathering for the private sector. The three-day Private Investment for Climate Conference wound up with a message for businesses to embrace the risks and opportunities posed by climate change. 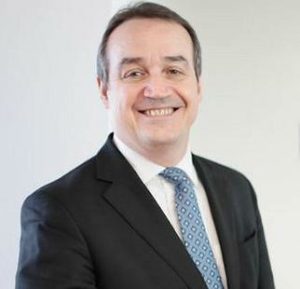 “Business cannot succeed on a planet that fails,” declared Green Climate Fund’s Executive Director Yannick Glemarec of France. “Businesses cannot afford to be passive about climate change,” he said. “Because ultimately all investment will be impacted by climate risk.”

While warning that untrammelled climate change “endangers the security and economic livelihoods of hundreds of billions of people,” Glenmarec spoke in glowing terms about the business chances that will accompany the emergence of a low-carbon, climate-resilient global economy.

Participants from over 100 countries explored how to tap the acumen of the business world and the power of profits to drive new trends in sustainable development.

A key focus of the private sector conference was exploring how to break through market barriers, which currently means that only a small fraction of more than US$210 trillion of private sector assets is directed towards climate action.

Compañía Española de Financiación del Desarrollo (COFIDES) is a joint state and privately-owned company accredited by GCF in October last year to finance climate initiatives based on its experience of private sector investments across nearly 90 countries.

The two organizations signed an agreement on Wednesday which lays the legal groundwork for GCF to injects its own catalytic input of public funds into COFIDES’ investments in climate action initiatives around the world.

COFIDES Chairman José Luis Curbelo said during the signing in Seoul, “Thanks to this support from the Green Climate Fund, COFIDES has bolstered its capacity to support private-sector climate change mitigation and adaptation projects.”

“In the coming years,” he said, “we hope to increase our portfolio of climate projects in sectors such as infrastructure, energy efficiency, water and sanitation, renewable energy and agro-industry and among others.”

“GCF hopes to capitalise on the financial expertise of COFIDES to help us redirect the world’s private sector assets, estimated at around US$210 trillion, to fund low-emission and climate-resilient initiatives,” Manzanares said.

But for some, the Green Climate Fund is going in the wrong direction. The fund’s former director Héla Cheikhrouhou has complained that the fund is backing too many “business-as-usual types of investment proposals,” a view supported by some civil society organizations.

Controversially, the Green Climate Fund has signed as partners Deutsche Bank, HSBC, and Credit Agricole, despite their record as financers of fossil fuel enterprises.

“The Green Climate Fund is supposed to finance the world’s shift away from fossil fuels. But fossil fuel-funding banks are eager to get on board,” wrote Oscar Reyes in “Foreign Policy in Focus” in July 2016.

At this week’s board meeting, Deutsche Bank wants support for a renewable energy investment fund, and the European Investment Bank wants the GCF to support the expansion of a “fund of funds” that it runs out of tax-easy Luxembourg.

Support for the fund of funds would back other investment funds focused on renewable energy and energy efficiency, but initial project documentation suggests to Reyes that, “…it could also back controversial biodiversity offsets and biofuels.” These types of funding are accused of “privatizing nature and fueling land grabs.”

But the Green Climate Fund also earned praise from 20 Sri Lankan groups for allowing citizen participation in the creation of a climate adaptation project to help smallholder farmers in Sri Lanka. The groups noted that the project had been “developed in full consultation with local communities and draws from [their] experience,” in contrast to the usual problems that civil society has with development banks.