Honors to Women and Girls Who Feed the World

And for building one of the world’s largest and most effective anti-poverty organizations.

Sir Fazle is first to acknowledge that the success of BRAC is built on empowering women and girls.

“We have focused attention on women so far because we felt that women could actually play a much bigger role than they have in the past,” Sir Fazle said in his Laureate Address in Des Moines October 16.

“If there is no food in the household and there are children hungry, what is the mother going to do? We deliberately focused our attention on women as change agents in our societies,” he said.

Empowering and educating women and girls has been central to BRAC’s success in confronting hunger and malnutrition and releasing millions of people from poverty in Bangladesh and 10 other countries.

The global reach of BRAC is unique, with more than 110,000 employees around the world, and a further 150,000 BRAC-trained entrepreneurs providing low-cost seeds, medicines and training to their rural neighbors.

“It is difficult to express in words how honored and deeply touched I am by this recognition,” Sir Fazle said upon receiving the award.

“The real heroes in our story are the poor themselves and, in particular, women struggling with poverty who overcome enormous challenges each day of their lives,” he reminded the audience.

“Through our work across the world we have learnt that countries and cultures vary, but the realities, struggles, aspirations and dreams of poor and marginalized people are remarkably similar.” 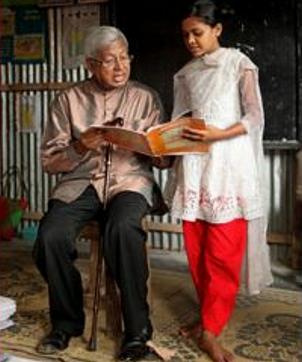 Sir Fazle, who was knighted by the British Crown in 2009, has grown BRAC from a 1972 wish to help Bangladesh recover from a deadly tropical cyclone and war of independence, until today it employs over 100,000 people, 70 percent of them women.

These enterprises generate income that is used to subsidize primary schools and basic healthcare.

In these ways, BRAC has been a leader in empowering women and girls through microfinance, education, healthcare, and encouraging their active participation in directing village life.

BRAC has just increased its commitment to girls’ education in low-income countries with a five-year pledge to reach 2.7 million more girls through primary and pre-primary schools, teacher training, adolescent empowerment programs and scholarships.

“At a time when the world confronts the great challenge of feeding over nine billion people, Sir Fazle Abed and BRAC, the organization he founded and leads, have created the pre-eminent model being followed around the globe on how to educate girls, empower women and lift whole generations out of poverty,” said Quinn.

The World Food Prize award ceremony and Laureate Address are part of the annual Borlaug Dialogue, a food security conference named for Norman Borlaug, who was awarded the 1970 Nobel Peace Prize for his work to feed the world. 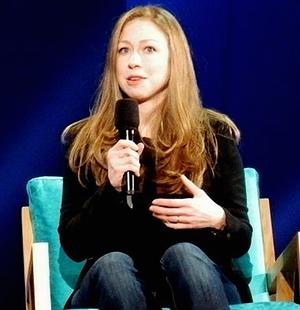 Chelsea Clinton, vice president of the Clinton Foundation, was one of the keynote speakers during this year’s Borlaug Dialogue, held in downtown Des Moines. Her focus was the empowerment of girls and women.

“Women are a crucial, vital and necessary part of solving the challenge of alleviating hunger,” said Clinton, the daughter of former President Bill Clinton and Hillary Clinton, candidate for the Democratic presidential nomination.

About 800 million people “aren’t getting the nutritious food they need. And we’re not on track to feed the nine billion people we expect to have on our planet by 2050,” she said.

“We’re squandering our potential,” Clinton said, when we send signals to young girls that their looks are more valuable than their brains.

Through BRAC, Sir Fazle has been a leader in empowering women and girls not through their looks, but through microfinance, education, healthcare, and encouraging their active participation in village life and community cohesion.

“We have always used an approach to development that puts power in the hands of the poor themselves, especially women and girls,” he said. “Educated girls turn into empowered women, and as we have seen in my native Bangladesh and elsewhere, the empowerment of women leads to massive improvements in quality of life for everyone, especially the poor.”