Is Climate Change to Blame? 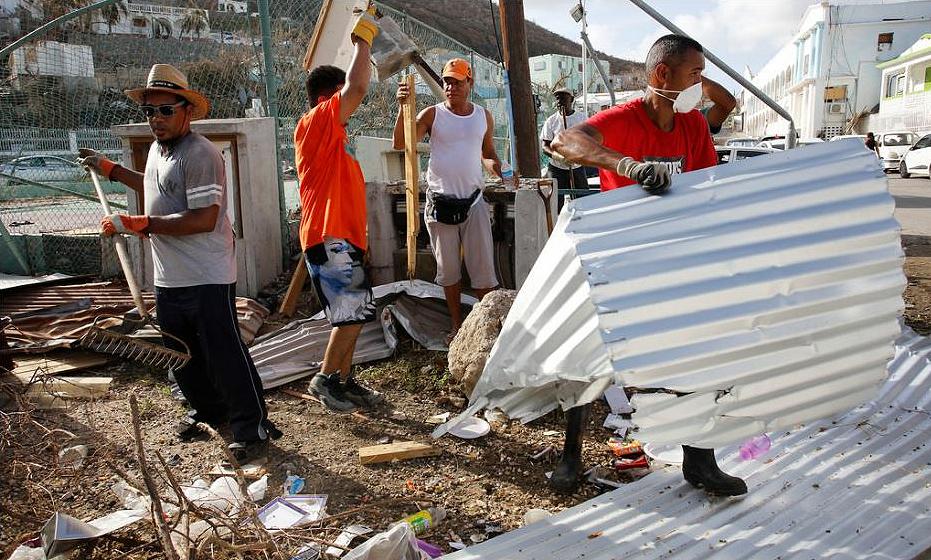 Houston, Texas resident up to his knees in floodwaters dumped by Hurricane Harvey, August 28, 2017 (Photo by Jill Carlson) Creative Commons license via Flickr

MIAMI, Florida, September 20, 2017 (Maximpact.com News) – Contemplating the destruction and suffering that four ferocious hurricanes have brought to the Caribbean over the past three weeks, UN Secretary-General António Guterres blames it on climate change.

This year’s hurricane season “fits a pattern,” he said at a high-level event at the UN to secure help for Hurricane Irma survivors. “Changes to our climate are making extreme weather events more severe and frequent, pushing communities into a vicious cycle of shock and recovery.”

“Extreme weather linked to climate change has an impact all over the world, including floods in southern Asia and landslides and droughts in Africa,” said Guterres. He also noted the impact of rising ocean surface temperature on weather patterns.

In the past month alone, four major hurricanes have ripped through the islands in the western Atlantic Ocean the Caribbean and lands lining the Gulf of Mexico. First Hurricane Harvey flooded Houston, Texas; then hurricanes Irma and Jose tore through, and now Hurricane Maria blasted in with Category 5 winds on Wednesday.

AT little less intense as a Category 4 hurricane, Maria made landfall as dawn broke in the U.S. territory of Puerto Rico on September 20 with maximum sustained winds of 150 miles per hour (250 km/h).

“Maria is an extremely dangerous category 4 hurricane on the Saffir-Simpson Hurricane Wind Scale, and it should maintain this intensity until landfall,” said forecasters at the National Hurricane Center. The last category 4 storm to hit Puerto Rico was in 1932.

Maria is following a similar track as Hurricane Irma blew down in the first two weeks of September, again striking small island developing states that were already reeling from Irma.

It is exceptionally rare to have two category 5 hurricanes in such a short space of time and on a similar track.

Maria made landfall in Puerto Rico with 155 mph winds, the first Category 4 hurricane to make landfall on the island since 1932. Now all of Puerto Rico is without electricity.

The U.S. National Hurricane Center is warning of a life-threatening storm surge for Puerto Rico and the U.S. Virgin islands.

Dominca, a small mountainous island with about 70,000 residents, lost all communications during the storm.

As Hurricane Maria struck, Dominican Prime Minister Roosevelt Skerrit posted a message on Facebook, saying, “Initial reports are of widespread devastation. So far we have lost all what money can buy and replace. My greatest fear for the morning is that we will wake to news of serious physical injury and possible deaths as a result of likely landslides triggered by persistent rains.”

“So far,” wrote Skerrit, “the winds have swept away the roofs of almost every person I have spoken to or otherwise made contact with. The roof to my own official residence was among the first to go and this apparently triggered an avalanche of torn away roofs in the city and the countryside.

“Come tomorrow morning,” he wrote, “we will hit the road, as soon as the all clear is given, in search of the injured and those trapped in the rubble. I am honestly not preoccupied with physical damage at this time, because it is devastating…indeed, mind-boggling,”

“My focus now is in rescuing the trapped and securing medical assistance for the injured. We will need help, my friend, we will need help of all kinds. It is too early to speak of the condition of the air and seaports, but I suspect both will be inoperable for a few days,” wrote Skerrit.

Skerrit is seeking help from friendly nations and organizations with helicopter services, because he is “eager to get up and get around the country to see and determine what’s needed.”

What many people believe is needed is a concerted decision to limit the greenhouse gas emissions they fear are driving climate change and causing these hurricanes to become even more devastating.

Most scientists say that changes in Earth’s atmosphere did not cause Hurricanes Harvey, Irma, Jose or Maria to form.

But most agree that the effects of climate change, such as warmer oceans and rising sea levels, made these storms more destructive than they would have been in earlier decades.

“The short version is, climate change makes these very bad storms worse,” said Sean Sublette, a meteorologist with Climate Central, a nonprofit organization of scientists who conduct scientific research on climate change and journalists who inform the public of key findings.

“It’s not the proximate cause of the storm, but it makes these bad storms worse,” said Sublette. “And in the case of a really bad storm, climate change can make it totally disastrous or catastrophic.”

The question of how climate and extreme weather interact will be central to the upcoming Science Summit, organized by the World Meteorological Organization’s <public.wmo.int> Commission for Atmospheric Sciences in Bali, Indonesia from October 20 to 22.

The Summit is an opportunity to shape the WMO’s research agenda, building toward a closer collaboration between weather, climate, water and environment research.

Scientists have been hard at work analyzing the relationship between climate change and extreme storms for years.

Back in May 2016, Australian scientists published a study in the journal “Geophysical Research Letters” showing that cities face harsher, more concentrated rainfall as climate change intensifies storms and draws them into narrower bands of more intense downpours.

Engineers at the University of New South Wales found that this has major implications for existing stormwater infrastructure, particularly in large cities, which face high risks of flash flooding.

“As warming proceeds, storms are shrinking in space and in time,” said doctoral student Conrad Wasko, lead author of the paper. “They are becoming more concentrated over a smaller area, and the rainfall is coming down more plentifully and with more intensity over a shorter period of time. When the storm shrinks to that extent, you have a huge amount of rain coming down over a smaller area.”

That analysis will sound familiar to the residents of Houston, Texas who were flooded with record-breaking amounts of rainfall – at least 30 inches (76 cm) of rain, with a maximum of 51.88 inches – in late August.

Hurricane Harvey brought record multi-day rainfall to the Houston area, after it stalled in the region following landfall.  Harvey had intensified before landfall after travelling over unusually warm waters (~2°C) in the western Gulf of Mexico.

“There is no clear evidence that climate change is making the occurrence of slowly moving land-falling hurricanes in the Houston region, such as Hurricane Harvey, more or less likely. However, some aspects or “ingredients” of the Harvey event may have linkages to climate change,” said the WMO’s Expert Team on Climate Impacts on Tropical Cyclones, led by Tom Knutson of NOAA’s Geophysical Fluid Dynamics Laboratory.

Because the tropical atmosphere now holds about seven percent more water vapor than it used to due to climate warming, Knutson and the Expert Team say the rainfall rates associated with Harvey “were likely made more intense by anthropogenic climate change.”