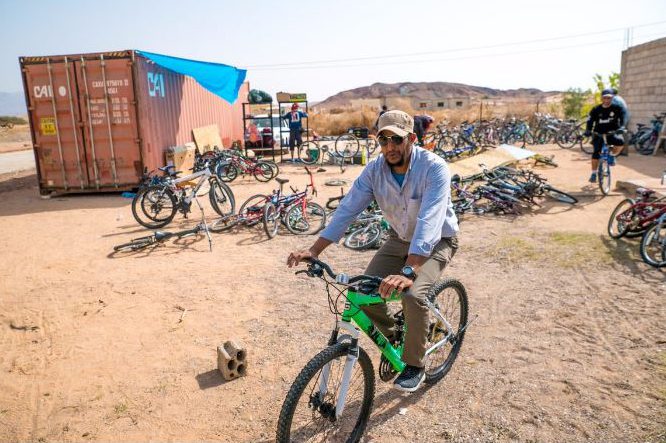 Used bikes arrive in Jordan, shipped from the United States. (Photo courtesy Wheels of Change) Posted for media use

The plan was conceived around a dinner table about as far away from the sunny Middle Eastern country of Jordan as anyone could get – chilly Anchorage, Alaska.

In September 2016, a small group of travel professionals, in Anchorage for the annual Adventure Travel World Summit, gathered for dinner.

At the table that night was Keith Sproule, executive director of A&K Philanthropy, associated with the American luxury travel agency Abercrombie & Kent with its global network of 52 offices.

Also at the table was Dan Austin, founder of Austin Adventures and the nonprofit Wheels of Change that began donating bikes and operational skills to remote communities in Africa in 2010.

Muna Haddad was there. She serves as director of the Jordan-based social enterprise Baraka, whose mission is to support sustainable tourism while conserving and protecting cultural heritage and natural resources.

They listened intently as Asfour told how Jordan is seeing an increasing interest in cycling, but currently only the affluent can afford to own a bike. In rural areas bikes are very scarce. 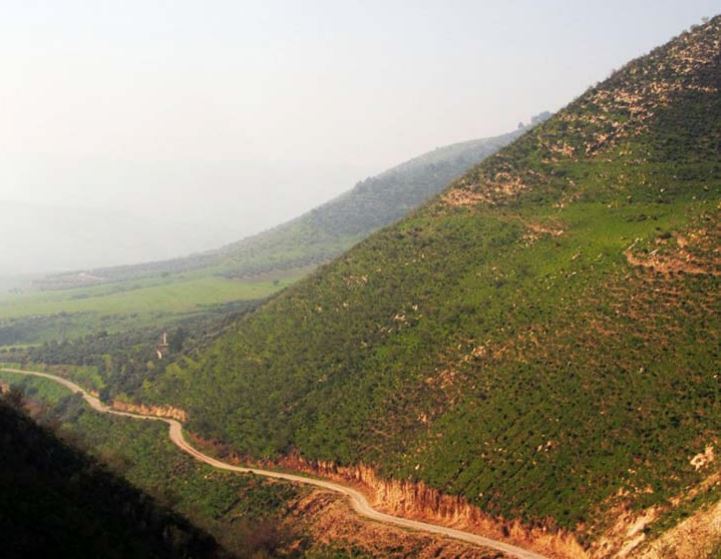 Starting at the basalt ruins of the Decapolis of Um Qais overlooking the Sea of Galilee, the Jordan Trail heads down towards the Arab Dam. (Photo courtesy Jordan Trail) Posted for media use

Asfour explained that Jordan is actively building partnerships with adventure travel companies, introducing new cycling itineraries and mapping out adventurous bike trails nationwide, including the newly completed Jordan Trail, which runs the entire length of the country, 650 kilometers, from Um Qais in the north to Aqaba in the south.

Once the idea of bikes for Jordan took hold of their imaginations, the people in this core group around the Anchorage dinner table began to reach out to other tourism professionals for support.

They received commitments from the travel insurance company World Nomads through its online philanthropy project Footprint Network, which agreed to help provide funding.

Jordan suffers from a high unemployment rate, officially at 15 percent. Residents of remote villages often do not have the transportation they need to reach employment and educational opportunities.

To overcome these problems, the tourism professionals plan to establish two bike shops in Um Qais Village at one end of the Jordan Trail and in Feynan.

Used bikes are being shipped to Jordan from the United States. The shipping containers will be repurposed as bike rental, sales and repair shops.

Each shop will include a bike tour component, serving as a starting point for local bike tours. Four people from Um Qais are now being trained as tour guides.

The new bike shops can provide steady employment for up to eight people, and will give others the means to travel farther for jobs or school, to reach their livestock, or have better access to health care.

This project will tie into the Jordan Trail initiative, enabling locals and visitors to bike between villages along the trail.

In December 2016, four months after the plan was conceived in Alaska, the first container of 260 mountain bikes, spare parts and tools organized by Wheels of Change departed Billings, Montana. It was bound for Feynan, Jordan in the Dana Biosphere Reserve with its historic ruins and ecolodge on the Jordan Trail.

On April 26, 2017, the first container was officially opened. Present for the festivities were Andy Austin and Corey Meyer, two Austin Adventures guides assigned to do much of the mechanical training, along with Muna Haddad of Baraka, who will be the on-ground project manager.

Haddad and her staff will work with the beneficiary communities, investing in setting up the shops, conducting training, overseeing facilities and handling the logistics of ground transport into and around Jordan.

A second container of 412 mountain bikes, spare parts and wheels sent by A&K Philanthropy in partnership with Working Bikes in Chicago was shipped on March 13. It is scheduled to arrive on or about May 28th in Madaba, central Jordan.

Baraka will help set up another bike shop in Madaba as well as a bike share program at Petra University, making it the first bicycle-friendly campus in Jordan.

There is a recycle and reuse component to the venture built in from the start to keep donated bikes from ending up in a landfill.

Once all of the elements are in place, the shops are designed to be sustainable, paying for the costs of resupplying their stock of bikes with money earned through the sales and repair of bikes and the rental of bikes for tours.

Another positive element to the bike shop operation is its mission to give back to the community. After all wages and business expenses are paid, the remaining funds are set aside to fund local charitable projects.

“It’s beautiful to see an idea come to life,” posted Haddad on Facebook. “This is how we change the world, one idea at a time and a lot of hard work in between.”

This project was showcased at the Adventure Travel Trade Association’s AdventureNEXT Near East, held from May 15 to 17 on the shore of the Dead Sea in Jordan, the first event of its kind to highlight adventure travel in the Near East.

Sproule presented the bike donation initiative at the conference to demonstrate how such strategic partnerships can successfully benefit grassroots development and tourism, helping to create new skills and business opportunities.