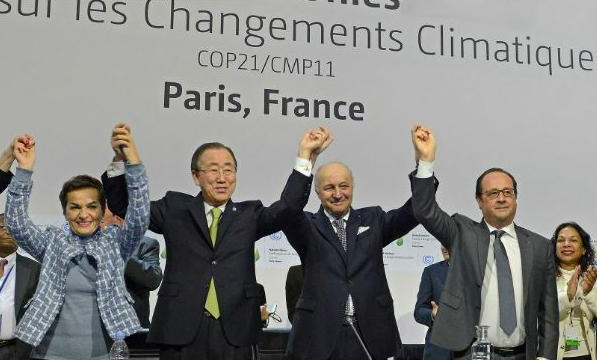 NEW YORK, New York, October 6, 2016 (Maximpact.com News) – The Paris Agreement on climate change is set to enter into force on November 4, less than a year after it was adopted by world leaders. With the ratifications deposited Wednesday, enough countries have approved the landmark accord to bring it to the emissions threshold that will trigger its implementation.

“What once seemed unthinkable, is now unstoppable,” said United Nations Secretary-General Ban Ki-moon as he accepted the latest instruments of ratification that pushed the agreement over the threshold.

“Strong international support for the Paris Agreement entering into force is a testament to the urgency for action, and reflects the consensus of governments that robust global cooperation, grounded in national action, is essential to meet the climate challenge,” Ban said.

Ban, who will step down as secretary-general on December 31, has made adoption of the world’s first global climate agreement a priority of his 10 years as UN leader.

Over the past decade, Ban has labored to accelerate the global response to climate change. He has visited communities on the climate frontlines, from the Arctic to the Amazon, and has witnessed how climate impacts are already devastating lives, livelihoods and prospects for a better future.

On Wednesday, he reminded world leaders that the work of implementing the agreement still lies ahead, saying, “Now we must move from words to deeds and put Paris into action. We need all hands on deck – every part of society must be mobilized to reduce emissions and help communities adapt to inevitable climate impacts.“

Adopted in Paris by the 195 Parties to the UN Framework Convention on Climate Change (UNFCCC) at a conference known as COP21 this past December, the Agreement calls on countries to combat climate change and to accelerate and intensify the actions and investments needed for a sustainable low-carbon future, as well as to adapt to the increasing impacts of climate change.

The pact was signed in New York on April 22, Earth Day, by 175 countries at the largest, single-day signing ceremony in history.

It will enter into force 30 days after at least 55 countries, accounting for 55 percent of global greenhouse emissions, deposit their instruments of ratification, acceptance or accession with the secretary-general.

The requirements for entry into force were satisfied today when Austria, Bolivia, Canada, France, Germany, Hungary, Malta, Nepal, Portugal and Slovakia, as well as the European Union, deposited their instruments of ratification with the Secretary-General.

Earlier this week, New Zealand and India signed onto the Agreement, following the 31 countries which joined at a special event at the United Nations on September 21 during the UN General Assembly’s general debate.

Wednesday in the Rose Garden at the White House, President Barack Obama said, “Today, the world meets the moment. And if we follow through on the commitments that this agreement embodies, history may well judge it as a turning point for our planet.”

“Now, the Paris Agreement alone will not solve the climate crisis. Even if we meet every target embodied in the agreement, we’ll only get to part of where we need to go,” said Obama. “But make no mistake, this agreement will help delay or avoid some of the worst consequences of climate change. It will help other nations ratchet down their dangerous carbon emissions over time, and set bolder targets as technology advances, all under a strong system of transparency that allows each nation to evaluate the progress of all other nations.“

“By sending a signal that this is going to be our future – a clean energy future – it opens up the floodgates for businesses, and scientists, and engineers to unleash high-tech, low-carbon investment and innovation at a scale that we’ve never seen before,” Obama said. “So this gives us the best possible shot to save the one planet we’ve got.“

Mindy Lubber, president of the non-profit Ceres, said, “The world must ratchet up global investment in clean energy by an additional $1 trillion a year to achieve the Paris Agreement goals. Global investment in clean energy is currently tracking at about $300 to $350 billion a year, which is far short of the Clean Trillion target we need to hit every year to avoid catastrophic climate warming.”

Based in Boston, Massachusetts, Ceres mobilizes investor and business leadership to build a sustainable global economy.

“We have much more to do to navigate the transition to a sustainable economy, but today represents a major step forward,” Lubber said.

The Paris Agreement will enter into force in time for the Climate Conference (COP 22) in Morocco in November, where countries will convene the first Meeting of the Parties to the Agreement. Countries that have not yet joined may participate as observers.

UNFCCC Executive Secretary Patricia Espinosa said, “Above all, entry into force bodes well for the urgent, accelerated implementation of climate action that is now needed to realize a better, more secure world and to support also the realization of the Sustainable Development Goals.”

“It also brings a renewed urgency to the many issues governments are advancing to ensure full implementation of the Agreement,” Espinosa said. “This includes development of a rule book to operationalize the agreement and how international cooperation and much bigger flows of finance can speed up and scale up national climate action plans.”

In Strasbourg, France, European Commissioner for Climate Action and Energy Miguel Arias Cañete said, “Our collective task is to turn our commitments into action on the ground. And here Europe is ahead of the curve. We have the policies and tools to meet our targets, steer the global clean energy transition and modernise our economy. The world is moving and Europe is in a driver’s seat, confident and proud of leading the work to tackle climate change.“

Congratulating all of the signatories of the Agreement, the Secretary-General encouraged all countries to accelerate their domestic processes to ratify the Agreement as soon as possible.

Specifically, the Agreement calls on countries to combat climate change and to accelerate and intensify the actions and investments needed for a sustainable low-carbon future, and to adapt to the increasing impacts of climate change.

It also aims to strengthen the ability of countries to deal with the impacts of climate change. The Agreement calls for appropriate financial flows, a new technology framework and an enhanced capacity-building framework to support action by developing countries and the most vulnerable countries in line with their own national objectives.