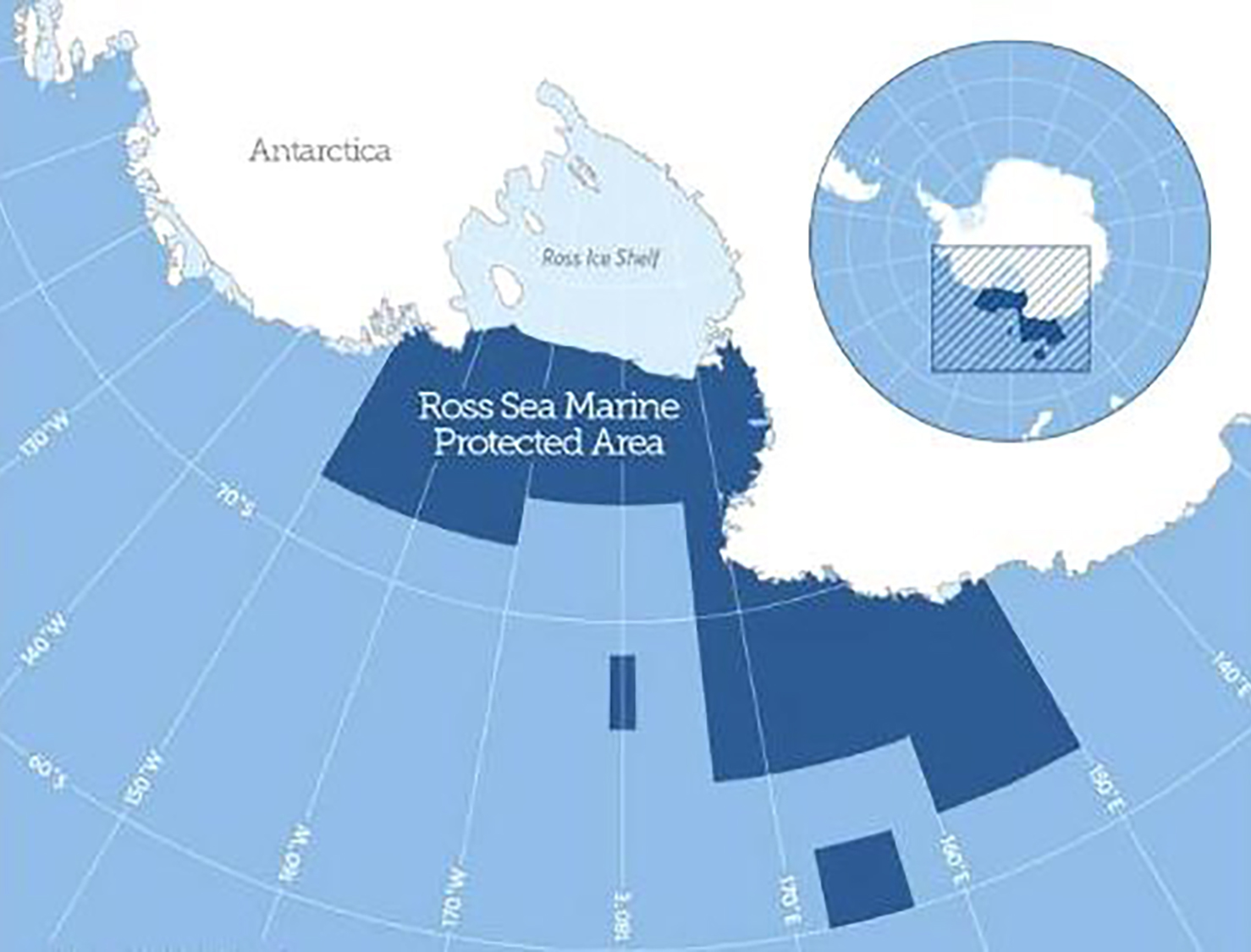 Map of the newly protected marine area in the Ross Sea (Map by Pew Charitable Trusts courtesy New Zealand Ministry of Foreign Affairs and Trade) posted for media use.

At a meeting of the Commission for the Conservation of Antarctic Marine Living Resources (CCAMLR) in Hobart late last month, all members agreed to a joint proposal by the United States and New Zealand to establish a 1.55 million square kilometer (598,000 square mile) area of the Ross Sea that will be protected from human activities.

To the west of the new marine protected area (MPA) lies Ross Island and to the east Roosevelt Island, while the southernmost part is covered by the Ross Ice Shelf. It is located about 320 km (200 miles) from the South Pole.

Seventy-two percent of the MPA will be a no-take zone, which bans all fishing, while other sections will permit some harvesting of fish and krill for scientific research.

The United States and New Zealand worked together on the MPA proposal, a logical development as they are next-door neighbors in Antarctica. McMurdo Station, a U.S. Antarctic research center on the south tip of Ross Island, is in the New Zealand-claimed Ross Dependency on the shore of McMurdo Sound. Just three kilometers (two miles) away by road is the Scott Base, New Zealand’s research facility also in the Ross Dependency.

CCAMLR Executive Secretary Andrew Wright says the decision was years in the making. “This has been an incredibly complex negotiation which has required a number of member countries bringing their hopes and concerns to the table at six annual CCAMLR meetings as well as at intersessional workshops.”

“A number of details regarding the MPA are yet to be finalized, but the establishment of the protected zone is in no doubt and we are incredibly proud to have reached this point,” said Wright.

“We are heartened by the adoption of the Ross Sea MPA and we congratulate all members for taking decisive action towards meeting a 2009 commitment to establish a representative system of MPAs within the CCAMLR area,” Slocum said.

New Zealand’s Foreign Minister Murray McCully hailed the breakthrough agreement that will safeguard what he called “one of the world’s few remaining pristine natural environments.“

“New Zealand has played a leading role in reaching this agreement which makes a significant contribution to global marine protection,” he said.

“The proposal required some changes in order to gain the unanimous support of all 25 CCAMLR members and the final agreement balances marine protection, sustainable fishing and science interests,” McCully explained. “The boundaries of the MPA, however, remain unchanged.“

U.S. Secretary of State John Kerry said creation of the Ross Sea MPA is “…proof that the world is finally beginning to understand the urgency of the threats facing our planet.“

“The United States is grateful for the cooperation with our New Zealand co-sponsors of the proposal, and of all CCAMLR members, including Russia, to make this achievement possible,” Kerry said.

His nod to Russia for its agreement comes after previous CCAMLR meetings with a different outcome. In 2013, for instance, Russian delegates tried everything from delay and confusion tactics to challenging of the legality of CCAMLR’s right to establish MPAs to avoid an accord.

But Kerry says the lengthy and sometimes frustrating negotiations were worth it for this year’s outcome. 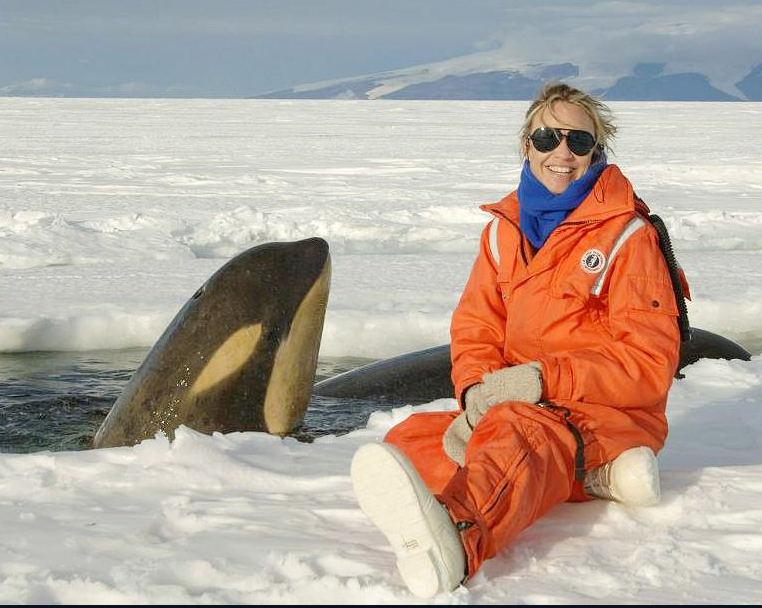 U.S. National Oceanic and Atmospheric Administration marine ecologist Lisa Ballance in the southern Ross Sea, Antarctica, at a site where NOAA satellite-tagged one of the local forms of killer whales, 2007. (Photo by NOAA) public domain.

“The Ross Sea Region MPA will safeguard one of the last unspoiled ocean wilderness areas on the planet,” he said, “home to unparalleled marine biodiversity and thriving communities of penguins, seals, whales, seabirds, and fish.”

The Ross Sea is one of the last stretches of seas on Earth that remains relatively unaffected by human activities and almost totally free from pollution and the introduction of invasive species.

Marine biologists regard the Ross Sea as highly biodiverse, after a long history of human exploration and scientific research, with some datasets going back over 150 years.

The sea is inhabited by at least 10 mammal species, including the Antarctic minke whale, killer whale, Weddell seal, crabeater seal, and leopard seal.

There are 95 species of fish and and over 1,000 invertebrate species in the Ross Sea, including the Antarctic toothfish, Antarctic silverfish, Antarctic krill, and crystal krill.

Numerous environmental groups have campaigned to make the area a world marine reserve, citing the rare opportunity to protect the Ross Sea from human degradation.

The nonprofit Antarctic and Southern Ocean Coalition (ASOC) based in Washington, DC, a coalition of over 30 nongovernmental organizations, has been advocating protection of the Ross Sea for years.

The new MPA “…has the richest diversity of fishes in the high latitude Southern Ocean, including seven species found nowhere else, with an evolutionary radiation equivalent to the Galapagos, the African rift lakes, and Lake Baikal, all designated as World Heritage Sites for their exemplary fauna,” says ASOC.

“Any alteration of the food web or degradation of habitat will have the same damaging effects that have been documented elsewhere on Earth, such as toxic algal blooms, oxygen-deprived dead zones and jellyfish invasions,” the NGO warns.

Exploratory fisheries first appeared in the Southern Ocean in the early 1960s with full-scale commercial fisheries underway by the 1970s, targeting fish and krill. In a familiar pattern, fish populations were discovered, exploited, depleted and then the fisheries closed.

Willie Mackenzie, with Greenpeace UK’s biodiversity team, blogged in response to agreement on the new MPA, “Known as ‘the Last Ocean,’ the Ross Sea has been identified by scientists as the most pristine shallow ocean left on Earth. It’s stunning, but we were starting to wonder if it would ever be protected.“

To finally reach agreement on the Ross Sea MPA, a time clause of 35 years was included in the accord, so in 35 years CCAMLR members will again have to decide on the future of the Ross Sea.

Mackenzie wrote, “Marine protection, to be truly effective, needs to be long lasting so we have all those years ahead of us to make sure when the Ross Sea sanctuary is up for renewal, there is no resistance to making it permanent. We’re pretty confident that by 2051 it will be a simple decision!“