Young people at COP22 in Marrakech, Morocco will live with the consequences of the decisions made there. (Photo by UNFCCC) Posted for media use.

MARRAKECH, Morocco, November 15, 2016 (Maximpact.com News) – Sustainable transport leaders from the private sector met at the UN Climate Change Conference in Marrakech (COP22) on Saturday for the Global Climate Action event on Transport to move the world towards a cooler future.

They discussed how progress made on 15 initiatives covering all transport modes and more than 100 countries demonstrates that tackling emissions from transport is both possible and cost effective.

“The transport sector has made a great start, leading by example and spearheading the development of the broader Global Climate Action Agenda,” said Ségolène Royal, France’s Minister of the Environment, Energy and Marine Affairs, responsible for International Climate Relations.

“The 15 non-state actor transport initiatives whose progress are being reported in Marrakech have such a scope and scale that they are well on the way to triggering a broad transformation of the transport sector, as required to deliver on the Paris Agreement,” said Royal.

Prepared for the Marrakech conference, a report on the 15 Global Climate Action Agenda Transport Initiatives was released earlier this month.

2. Aviation’s Climate Action Takes Off: Collaborative climate action across the air transport sector aims to control growth of international aviation CO2 emissions through measures that include a goal of carbon-neutral growth through a global market-based mechanism.

Participating cities will incorporate over 160,000 buses in their fleets by 2020 and have committed to switching 42,000 buses to low emission. Greenhouse gas savings will be almost 900,000 tons a year, with a potential overall savings of 2.8 million tons each year if the cities switch their entire bus fleets.

To date, 26 cities around the world have signed the Clean Bus Declaration, demonstrating strong global demand.

4. Global Fuel Economy Initiative (GEFI) aims to double the average fuel economy of new light duty vehicles globally by 2030, and all vehicles by 2050.

For COP21 last year in Paris, GFEI launched “100 for 50 by 50,” a campaign to encourage new countries to commit to GFEI’s fuel economy improvement goals by developing and adopting national fuel economy policies, and to dedicate time and resources to supporting GFEI’s work. At COP21 GFEI announced funding for 40 new countries joining their work, with more expressing interest.

6. ITS for Climate: Using Intelligent Transportation Systems to work towards a low carbon, resilient world and to limit global warming below the 2-degree target and contribute to adaptation to climate change in large cities and isolated territories.

7. Low Carbon Road and Road Transport Initiative: Led by the World Road Association (PIARC), with its 121 government members, the initiative is committed to reducing the carbon footprint of road construction, maintenance and operation through technological innovation, green tendering and contracting. Will develop road networks in line with electric propulsion, autonomous cars, road-vehicle and vehicle-vehicle interactions, and enhancing intermodal cooperation.

8. MobiliseYourCity: 100 cities engaged in sustainable urban mobility planning to reduce greenhouse gas emissions in urban transport in developing countries. This initiative was unveiled during the World Climate and Territories Summit that took place in July in Lyon, France.

9. Navigating a Changing Climate: Think Climate, a multi-stakeholder coalition of 10 associations with interests in waterborne transport infrastructure, is committed to promoting a shift to low carbon inland and maritime navigation infrastructure.

11. UITP Declaration on Climate Change Leadership: UITP, the International Association of Public Transport, brings 350 future commitments and actions from 110 public transport undertakings in 80 cities. UITP’s goal is to double the market share of public transport by 2025, which would prevent half a billion tons of CO2 equivalent in 2025.

12. Urban Electric Mobility Initiative: The UEMI aims to boost the share of electric vehicles in urban transport and integrate electric mobility into a wider concept of sustainable urban transport that achieves a 30 percent reduction of greenhouse gas emissions in urban areas by 2030.

The UEMI is an active partnership that aims to track international action on electric mobility and to initiate local action. Current partners include: UN-Habitat, Wuppertal Institute, the International Energy Agency, Michelin, Clean Air Asia and the European Commission.

13. World Cycling Alliance and European Cyclists’ Federation have committed to increase the modal share of cycling worldwide and to double cycling in Europe by 2020. The commitment is supported by ECF and WCA, representing about 100 civil society organizations worldwide.

14. Worldwide Taxis4SmartCities: This initiative aims to accelerate the introduction of low emission vehicles in taxis fleets by 2020 and 2030 and promote sustainability. Nineteen companies representing more than 120,000 vehicles have committed to date.

15. ZEV Alliance: The International Zero-Emission Vehicle Alliance (ZEV Alliance) is a collaboration of governments acting together to accelerate the adoption of zero-emission vehicles – electric, plug-in hybrid, and fuel cell vehicles.

Scaled-up actions taken by the Global Climate Action Agenda Transport initiatives since COP21 in December 2015 include:

“For a growing region like Africa which is heavily impacted by climate change we need affordable and locally appropriate transport solutions that support economic and social development, provide access to mobility, and create local value,” said Boussaid.

Through the “we want to share experience and catalyse the development of resilient and intelligent highway infrastructure and the deployment of e-mobility in Morocco and beyond,” said Boussaid.

Transport is already responsible for one fourth of energy-related greenhouse gas emissions. under a business as usual scenario, transport emissions can be expected to grow from 7.7 Gt to around 15Gt by 2050. 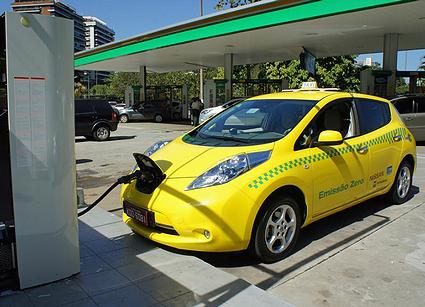 This is a global problem. For 45 percent of countries, transport is the largest source of energy related emissions, for the rest it is the second largest source.

But discussions at COP22 indicate that tackling emissions from transport is possible and cost effective, sustainable solutions are available.

“Transport initiatives by non-state actors are key for a successful implementation of the Nationally Determined Contributions submitted by over 160 countries on the occasion of COP21 in Paris,” said Dr. Hakima El Haite, Minister of Environment and Climate Champion, Morocco.

“The transport initiatives, by creating a new reality on the ground, increase popular understanding and support for climate action which, in turn, drives up governments’ ambition to tackle climate change.”

To find out more about the 15 initiatives, please read: Global Climate Action Agenda (GCAA) Transport Initiatives: Stock-take on action on the Implementation of the Paris Agreement on Climate Change and contribution towards the 2030 Global Goals on Sustainable Development Report