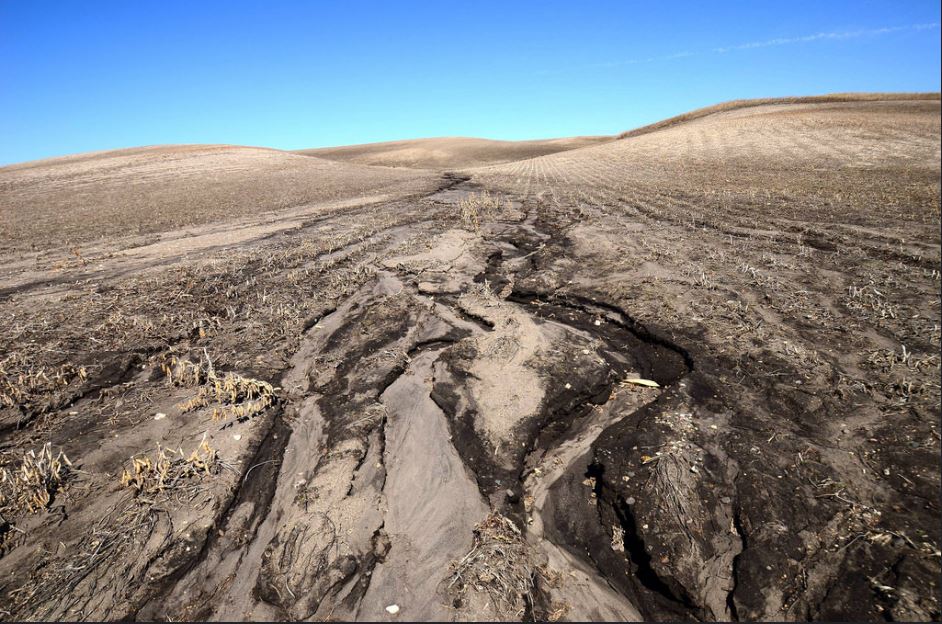 Excessive erosion on the U.S. Prairie. An inch of soil can take hundreds of years to form, but it can be swept away in a few seasons. Sediment loads in rivers silt up fish spawning beds, degrade drinking water quality, and cause silting of productive estuaries and reservoirs. March 27, 2017 (Photo by Rick Bohn / U.S. Fish & Wildlife Service) Public domain

Land degradation is now reaching “critical” levels in many parts of the world, the report warns.

Produced by the Intergovernmental Science-Policy Platform on Biodiversity and Ecosystem Services (IPBES), the report was approved at the IPBES Plenary in Medellín in March by the 129 IPBES member governments.

The dangers of land degradation, together with a catalogue of corrective options, are detailed for policymakers in the three-year assessment report by more than 100 experts from 45 countries.

The report draws on more than 3,000 scientific, government, indigenous and local knowledge sources. Extensively peer-reviewed, it was improved by thousands of comments from over 200 external reviewers. 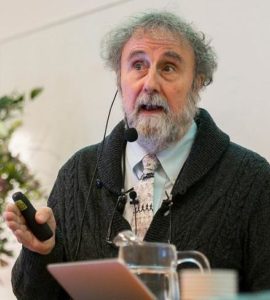 Sir Robert Watson, who chairs the Intergovernmental Science-Policy Platform on Biodiversity and Ecosystem Services, is a British chemist who has worked on atmospheric science issues – ozone depletion, global warming and paleoclimatology – since the 1980s. February 2018 (Photo by NTNU Vitenskapsmuseet) Creative Commons license via Flickr

“Through this report, the global community of experts has delivered a frank and urgent warning, with clear options to address dire environmental damage,” said IPBES Chair Sir Robert Watson.

“Land degradation, biodiversity loss and climate change are three different faces of the same central challenge: the increasingly dangerous impact of our choices on the health of our natural environment,” he said.

“We cannot afford to tackle any one of these three threats in isolation. They each deserve the highest policy priority and must be addressed together,” urged Sir Robert.

Dangerous to Humans and Wildlife

“With negative impacts on the well-being of at least 3.2 billion people, the degradation of the Earth’s land surface through human activities is pushing the planet towards a sixth mass species extinction,” said Professor Robert Scholes of South Africa, co-chair of the assessment with Dr. Luca Montanarella of Italy.

Rapid expansion and unsustainable management of croplands and grazing lands is the most extensive global driver of land degradation, causing loss of biodiversity and ecosystem services – food security, water purification, the provision of energy and other essential contributions of nature.

“Avoiding, reducing and reversing this problem, and restoring degraded land, is an urgent priority to protect the biodiversity and ecosystem services vital to all life on Earth and to ensure human well-being,” said Scholes.

“Wetlands have been particularly hard hit,” said Dr. Montanarella. “We have seen losses of 87 percent in wetland areas since the start of the modern era – with 54 percent lost since 1900.”

Less than one quarter of the Earth’s land surface remains free from substantial human impacts, the report finds. By 2050 it is estimated that this will drop to less than 10 percent – and this will be mostly in deserts, mountainous areas, tundra and polar areas unsuitable for human use or settlement.

Habitat loss through transformation, and the decline in suitability of the remaining habitat through degradation, are the leading causes of biodiversity loss.

Between 1970 and 2012, the index of the average population size of wild land-based species of vertebrates dropped by 38 percent and freshwater species by 81 percent.

Underlying drivers of land degradation, says the report, are the high-consumption lifestyles in the most developed economies, combined with rising consumption in developing and emerging economies.

High and rising per capita consumption, amplified by continued population growth in many parts of the world, can drive unsustainable levels of agricultural expansion, natural resource and mineral extraction, and urbanization – typically leading to greater levels of land degradation.

Every five percent loss of gross domestic product, itself partly caused by degradation, is associated with a 12 percent increase in the likelihood of violent conflict.

Crop and grazing lands now cover more than one third of the Earth’s land surface, with recent clearance of native habitats, including forests, grasslands and wetlands, concentrated in some of the most species-rich ecosystems on the planet.

The report says increasing demand for food and biofuels will likely lead to continued increase in nutrient and chemical inputs and a shift towards industrialized livestock production systems, with pesticide and fertilizer use expected to double by 2050.

Avoidance of further agricultural expansion into native habitats can be achieved through yield increases on the existing farmlands, shifts towards less land degrading diets, such as those with more plant-based foods and less animal protein from unsustainable sources, and reductions in food loss and waste.

The IPBES report finds that land degradation is a major contributor to climate change, with deforestation alone contributing about 10 percent of all human-induced greenhouse gas emissions.

Another major driver of the changing climate has been the release of carbon previously stored in the soil, with land degradation between 2000 and 2009 responsible for annual global emissions of up to 4.4 billion tonnes of carbon dioxide (CO2).

Given the importance of soil’s carbon absorption and storage functions, the avoidance, reduction and reversal of land degradation could provide more than a third of the most cost-effective greenhouse gas mitigation activities needed by 2030 to keep global warming under the 2°C threshold targeted in the Paris Agreement on climate change.

Four-fifths of the world’s population now lives in areas where there is a threat to water security.

Transformation of natural ecosystems to human use can increase the risk of human diseases such as Ebola, monkey pox and Marburg virus, some of which have become global health risks by bringing people into more frequent contact with pathogens capable of transferring from wild to human hosts.

Modifications in hydrological regimes affect the prevalence of pathogens and vents that spread disease.

Land degradation generally increases the number of people exposed to hazardous air, water and land pollution, particularly in developing countries, with the worst-off countries recording rates of pollution-related loss of life higher than those in wealthy countries, the assessment shows.

Land degradation, especially in coastal and riparian areas, increases the risk of storm damage, flooding and landslides, with high socio-economic and human costs.

Land restoration also can increase food and water security and contribute to the avoidance of conflict and migration.

“In just over three decades from now, an estimated four billion people will live in drylands,” said Scholes. “By then it is likely that land degradation, together with the closely related problems of climate change, will have forced 50-700 million people to migrate.”

“Decreasing land productivity also makes societies more vulnerable to social instability – particularly in dryland areas, where years with extremely low rainfall have been associated with an increase of up to 45 percent in violent conflict,” he said.

Dr. Montanarella forecast, “By 2050, the combination of land degradation and climate change is predicted to reduce global crop yields by an average of 10 percent, and by up to 50 percent in some regions.

She pinpointed the locations where the worst land degradation would occur. “In the future,” she said, “most degradation will occur in Central and South America, sub-Saharan Africa and Asia – the areas with the most land still remaining that is suitable for agriculture.”

The report also underlines the challenges that land degradation poses, and the importance of restoration, for key international development objectives, including the United Nations Sustainable Development Goals and the Aichi Biodiversity Targets.

“The greatest value of the assessment is the evidence that it provides to decision makers in government, business, academia and even at the level of local communities,” said Dr. Anne Larigauderie, executive secretary of IPBES.

“With better information, backed by the consensus of the world’s leading experts, we can all make better choices for more effective action,” she said.

The report points to successful examples of land restoration that are found in every ecosystem, and the many well-tested practices and techniques, both traditional and modern, that can avoid or reverse degradation.

In croplands, soil loss can be reduced and soil health improved with the use of salt tolerant crops, conservation agriculture and integrated crop, livestock and forestry systems.

On rangelands, traditional grazing, maintenance of appropriate fire regimes, and the reinstatement or development of local livestock management practices and institutions have proven effective.

Successful responses in wetlands include control over pollution sources, managing the wetlands as part of the landscape, and reflooding wetlands damaged by draining.

In urban areas, spatial planning, replanting with native species, the development of “green infrastructure” such as parks and riverways, remediation of contaminated soils and those sealed under asphalt, wastewater treatment and river channel restoration are identified as key options for action.