And then, of course, there’s the Apple watch.

Smartphone microscopes could improve detection of skin cancers in developing countries, dermatologists at the University of Texas Health Science Center in Houston (UTHealth) said in February. 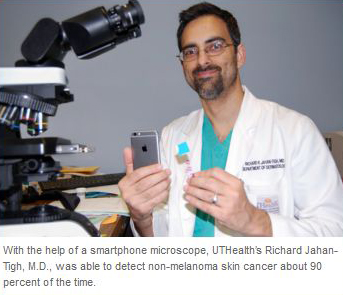 “Doctors in some remote areas don’t have access to the high-powered microscopes we use to evaluate skin samples,” said Richard Jahan-Tigh, MD, assistant professor of dermatology at McGovern Medical School at UTHealth. “Doctors there could conceivably use their smartphones to photograph growths and forward them for examination.”

A smartphone microscope can be made with a 3 mm ball lens, a tiny piece of plastic to hold the ball lens over the smartphone lens and tape to grip everything in place. Typically used for laser optics, a ball lens costs about $14 at an electronics store in the USA.

A doctor or technician holds a smartphone microscope over a skin sample on a slide. The doctor then either reads the sample or takes a photo and emails it to a pathologist for interpretation.

A study conducted by Jahan-Tigh and colleagues at McGovern Medical School and Harvard Medical School found smartphone microscopes to be “reasonably accurate.”

Findings appear in the journal “Archives of Pathology & Laboratory Medicine.”

Researchers at Sweden’s Umeå University, collaborating with scientists at the University of Pretoria in South Africa, have developed a way to simplify the diagnosis of ear infections, which annually affect half a billion children worldwide.

The software-based method is a cloud-based analysis of eardrum images taken using an otoscope, an instrument normally used in the medical examination of ears.

Images of eardrums, taken with a digital otoscope connected to a smartphone, are compared to high-resolution images in an archive and automatically categorized into diagnostic groups.

The method is described in “EBioMedicine,” a new publication of the British medical journal “The Lancet.”

Accuracy is as good or better than the rate of 64 to 80 percent achieved by doctors using traditional otoscopes for diagnosis.

“Because of lack of health personnel in many developing countries, ear infections are often misdiagnosed or not diagnosed at all. This may lead to hearing impairments, and even to life-threatening complications,” said co-author Claude Laurent, researcher at the Department of Clinical Sciences at Umeå University.

“This method has great potential to ensure accurate diagnoses of ear infections in countries where such opportunities are not available at present.”

Samsung has applied for a patent in South Korea for contact lenses that can project images into a wearer’s eyes. The lenses embed a camera, an antenna and sensors controlled by blinking. A smartphone is needed for processing.

The South Korean copyright authority has published the application made by the consumer electronics firm in September 2014, reports the technology blog Sammobile this week.

Under the Samsung patent application a sensor on the lens is usable as a monitor for blood glucose levels.

Now, diabetics prick themselves to get a blood sample that they test for blood sugar with a portable electronic device. But many grow weary of puncturing their skin on a daily basis.

In July 2014, the Swiss healthcare company Novartis announced that its eye care division, Alcon, would license the smart lens from a division of Google Inc.

Google and Novartis now are collaborating on a glucose-monitoring contact lens for diabetics that can detect the glucose in tears.

A smartphone or wearable computer, eyeglasses, jewelry, a scarf, hat or headband can incorporate a reader for the lens-embedded sensor.

Human trials of the Google-Novartis smart contact lenses are expected to begin this year.

While not wearable, this scalpel is smart enough to locate cancerous tumors in the brain. It contains sensors that by wiping a surface can determine whether the area is healthy or tumorous.

President of Mexican Talent Network Abroad chapter Belgium, Oliva said the device took six years to design. The mechanical and sensory parts were made at the University of Hannover, Germany, and neurosurgery hospitals, and the digital processing developed at the Free University of Brussels.

The smart scalpel is designed to be used in the operating room when a brain tumor is diagnosed and must be removed.

Sensors in the scalpel warn the neurosurgeon with visual and/or auditory displays about the status of the tissue. Results are obtained in less than half a second, saving vital time during an operation.

The prototype has been tested in artificial tumors and brain tissue from pigs. Human trials are next.

Oliva says the sensor technology can be miniaturized and adapted to detect tumors in the stomach or intestine. He foresees the use of smart scalpels in robot-assisted surgeries.

Everyday materials such as aluminum foil, sticky note paper, sponges and tape, are being used by electrical engineers at King Abdullah University of Science and Technology (KAUST) in Saudi Arabia to develop a low-cost sensor that can detect touch, pressure, temperature, acidity and humidity.

Their work was published on February 19 in the inaugural issue of the German journal “Advanced Materials Technologies.”

“Our work has the potential to revolutionize the electronics industry and opens the door to commercializing affordable high-performance sensing devices,” said Muhammad Mustafa Hussain, KAUST associate professor of electrical engineering from the University’s Integrated Nanotechnology Lab.

Unlike standard paper-based diagnostic materials, the structure of the synthetic paper is predetermined, not random.

“We also eliminate the variation between different sheets of paper because of differences in the structure, so all the medical tests will be as accurate,” said Dr. Jonas Hansson in the Micro and Nanosystems department at KTH.

The synthetic paper can tell more than whether a person has a disease or not. It can enable a user to determine the concentration of one or more biomarkers in a body fluid.

A combined pregnancy and HIV self-test could be conducted with a single sample on the synthetic paper because different parts of the paper can be used for different types of tests.

The KTH researchers say heart attack screening is one future possibility, helping patients get test results within 20 to 30 minutes, not the much longer wait times common in hospitals today.

The best known wearable healthcare device is the smartwatch developed by Apple Inc. The Apple Watch incorporates fitness tracking and health-oriented features integrated with iOS and other Apple products and services.

The heart rate sensor in Apple Watch uses technology known as photoplethysmography. Difficult to pronounce, the science behind it is simple. Blood is red because it reflects red light and absorbs green light.

Apple Watch uses green LED lights paired with light‑sensitive photodiodes to detect the amount of blood flowing through a wrist. When a heart beats, the blood flow in the wearer’s wrist – and the green light absorption – is greater. Between beats, it’s less.

By flashing LED lights hundreds of times per second, Apple Watch can calculate the number of times the heart beats each minute.

Relying on a wirelessly connected iPhone, an Apple Watch selects the best inputs for whatever the wearer is doing. When running indoors, it uses the accelerometer. When cycling outdoors, it uses the GPS in the phone.

Even when the wearer is not in a dedicated workout, the Apple Watch tracks movement, supplying – as with all these technologies – information key to improving fitness and health.