Looking north from the top of Lookout Mountain over the Tennessee Valley, the Tennessee River winds through the city of Chattanooga, March 31, 2018 (Photo by GT Photos) Creative Commons license via Flickr.

CHATTANOOGA, Tennessee, October 11, 2018 (Maximpact.com News) – Dr. Andreas Fath, professor of medical and life sciences at Germany’s Furtwangen University, broke a world record in 34 days this summer by swimming all 652 miles of the Tennessee River, from its headwaters in Knoxville, Tennessee, to its mouth in Paducah, Kentucky.

He was determined to perform the first comprehensive analysis of the Tennessee River’s water quality, and his swim turned out to be the most extensive interdisciplinary water quality survey ever conducted of North America’s most biologically diverse river.

Breaking world swimming records is familiar territory to Dr. Fath, who in 2014 broke the world record for speed swimming the Rhine River from the Swiss Alps through Germany to the North Sea.

In 2014, Fath and his team of scientists analyzed the Rhine for more than 600 substances and found that concentrations of persistent pollutants increased as they moved downstream.

“We found the great blockbusters in the Rhine,” Fath says, “from artificial sweeteners to residues of dishwasher tabs.” This means that many substances we use in our everyday lives survive wastewater treatment and end up in waterways.

This summer, Dr. Fath was able to compare the Tennessee River’s water quality to what he found in Germany’s Rhine River four years ago.

The levels of some chemical substances, such as pharmaceuticals, were lower in the Tennessee than in the Rhine.

The Tennessee River appears cleaner than the Rhine in some ways. When Fath emerged from the Tennessee after 34 days of swimming, he was free of infections, despite swimming with open wounds. By comparison, during his 2014 swim of the Rhine, Fath became sick with nausea and diarrhea from an infection.

Fath and his team found large quantities of microplastics in the Rhine. But the high levels of microplastic pollution in the Tennessee River set all his alarm bells ringing.

Fath collected samples from the Tennessee River with microplastic concentrations 8,000 percent higher than those found in the Rhine.

The levels of microplastic on the surface of the Tennessee were also 80 percent higher than in China’s Yangtze River, which a recent study found to be the source of 55 percent of all river-borne microplastic entering the ocean.

Microplastics are tiny plastic particles less than five millimeters in diameter. They easily pass through water filtration systems and end up in rivers and eventually in the oceans, posing a potential threat to aquatic life.

Aquatic birds and animals can mistake microplastics for food. Ingesting the tiny particles can prevent some species from consuming their natural prey, leading to starvation and death. Microplastics also have been found to cause reproductive complications in oysters.

Pollutants such as pesticides and manufacturing chemicals can adhere to microplastic particles and bioaccumulate in aquatic life, according to Adventure Scientists, a nonprofit based in Bozeman, Montana that has amassed one of the largest and most diverse global microplastic pollution datasets, called the Global Microplastics Initiative.

“I did not expect such high levels of microplastics. Therefore, we triple-checked the results,” Fath says of the Tennessee River. “By looking for a reason, we rather quickly made a plausible guess.”

Despite the similar length of the Rhine and the Tennessee, he says, the dramatic difference between the levels of microplastic is likely due to differing approaches to waste management and recycling.

Instead, Fath says the high levels are a byproduct of decomposition from large plastic waste in landfills.

“Once the land is filled with plastic waste, it breaks up, step by step, with the help of microorganisms, ultraviolet light and mechanical forces,” says Fath. “At the end of the day, the plastic is flushed into rivers as secondary microplastic.” 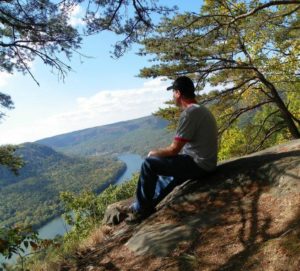 “By some measures the Tennessee River appears to have fairly good water quality. The high levels of microplastic particles are the real shocker,” says Dr. Martin Knoll, professor of geology and hydrology at Sewanee: The University of the South.

“A major contributing factor must be the abundant plastic waste we all see on roadsides,” said Dr. Knoll. “This plastic can easily make its way underground through the porous limestone and quickly move into the river.”

If the rate of microplastic entering the oceans is left unchecked, scientists predict there could be more plastic particulate than fish in the oceans by 2050.

One of Fath’s many sponsors is the Tennessee Aquarium, situated on the Tennessee River in downtown Chattanooga, and a member of the Aquarium Conservation Partnership. This consortium of 22 aquariums was formed last year to take the lead in combating microplastic pollution by eliminating single-use plastics in their operations and encouraging similar lifestyle changes in their visitors.

“We hope that, through our own efforts to stem the tide of microplastics, all of our guests will look for ways they can join us in reducing the amount of plastics in our aquatic environments,” says Dr. Anna George, the Tennessee Aquarium’s vice president of conservation science and education. “The solution to plastic pollution is in our hands.”

Given the levels of microplastics and the presence of industrial chemicals that have been outlawed in Europe for years, the Tennessee River is not healthy for the aquatic species that live in the waterway and its many tributaries.

“Based on the findings, it is not a healthy river at all,” Fath says. “The microplastic concentration, together with the chemical cocktail found in the river, is not a good combination for aquatic life in the Tennessee River.”

More than 1,400 aquatic species live in waterways within a 500-mile radius of Chattanooga. The Tennessee River and its many tributaries are inhabited by more than 230 fishes. There are more than 100 freshwater mussels, and more than 70 crayfishes – 90 percent of all American mussels and crayfish species.

The watershed holds more than 150 turtle and more than 50 salamander species – 80 percent of North America’s salamander species and half its turtle species. Many communities rely on the Tennessee River for drinking water, including Chattanooga, Knoxville and Huntsville.

Fath says the ecological damage to the Tennessee River could still be curbed. He suggests implementation of a treatment step in sewage plants to reduce the release of trace substances and legislation to reduce and control release limits for industries, agriculture and hospitals.

To curb the pandemic of microplastic pollution, he suggests encouraging wider scale adoption of recycling programs and a nationwide reduction in the use of single-use plastic items like shopping bags and straws.

“Plastic is a smart and important material in industries with a lot of economic benefits,” Fath says. “We appreciate its durability, but it is madness to use this non-degradable material for packaging of articles which are only used for minutes or hours. If we do not change that, we are going to wrap up the world with plastic.”