WASHINGTON, DC, November 27, 2018 (Maximpact.com ) – “Earth’s climate is changing faster than at any point in the history of modern civilization, primarily as a result of human activities,” warns a bombshell report from the U.S. government, released Friday. Produced by 300 scientists from 13 federal agencies, it finds that global warming is creating new risks and aggravating current vulnerabilities across the United States.

“The impacts of climate change are already being felt in communities across the country. More frequent and intense extreme weather and climate-related events, as well as changes in average climate conditions, are expected to continue to damage infrastructure, ecosystems, and social systems that provide essential benefits to communities,” states the Fourth National Climate Assessment, developed by the U.S. Global Change Research Program (USGCRP).

The report concludes that the United States will warm at least three more degrees by 2100 unless the burning of fossil fuels is limited immediately.

“Regional economies and industries that depend on natural resources and favorable climate conditions, such as agriculture, tourism, and fisheries, are vulnerable to the growing impacts of climate change,” states the report. “Rising temperatures are projected to reduce the efficiency of power generation while increasing energy demands, resulting in higher electricity costs.”

Yet this congressionally mandated report is being shrugged off by the Trump administration and Republicans although it warns of “growing challenges to human health and safety, quality of life, and the rate of economic growth.”

Although the congressionally mandated report is intended to be an authoritative assessment of the impacts of climate change on the United States, it was released over the Thanksgiving weekend, as if the Trump administration, led by a president who views climate change as a “hoax,” wants to deflect public attention from it.

This state-of-the-science synthesis of climate knowledge, impacts, and trends across U.S. regions and sectors is intended to inform decision making and resilience-building activities across the country.

But President Donald Trump told reporters that although he has read parts of the Fourth National Climate Assessment, he doesn’t believe it. “No, I don’t believe it,” the president said.

In 2017 Trump announced his intention to withdraw the United States from the Paris Climate Agreement, which, through voluntary measures taken by governments, seeks to limit global warming to 2°C above pre-industrial levels, and aims to limit warming to just 1.5°C above those levels.

White House Deputy Press Secretary Lindsay Walters dismissed the assessment, saying it was “…largely based on the most extreme scenario, which contradicts long-established trends by assuming that, despite strong economic growth that would increase greenhouse gas emissions, there would be limited technology and innovation, and a rapidly expanding population.”

Regardless, the Trump administration has rescinded Obama-era environmental regulations put in place to limit the burning of fossil fuels and the release of potent greenhouse gases such as methane, and has promoted the production of coal and other fossil fuels as part of Trump’s deregulatory agenda.

And it warns that future climate change will aggravate existing challenges to prosperity posed by aging and deteriorating infrastructure, stressed ecosystems, and economic inequality.

Former Vice President (1993-2001) and environmental activist Al Gore said Friday, “Unbelievably deadly and tragic wildfires rage in the west, hurricanes batter our coasts – and the Trump administration chooses the Friday after Thanksgiving to try and bury this critical U.S. assessment of the climate crisis. The President may try to hide the truth, but his own scientists and experts have made it as stark and clear as possible.”

“The rest of us are listening to the scientists – and to Mother Nature. The impacts of the Climate Crisis are being felt in all regions across our country – extreme weather, heat waves, deeper and longer droughts, crop failures, strengthening wildfires, sea level rise – and they are disproportionately borne by the most vulnerable among us.

“Mr. President,” said Gore, “the majority of Americans are deeply concerned about the climate crisis and demand action. Even as local leaders are responding in the wake of fires and storms, national leaders must summon the will to respond urgently to the dire warnings of this report with bold solutions.”

One of the sternest warnings in the report relates to water scarcity. The report states, “Groundwater depletion is exacerbating drought risk in many parts of the United States, particularly in the Southwest and Southern Great Plains. Dependable and safe water supplies for U.S. Caribbean, Hawaii, and U.S.-Affiliated Pacific Island communities are threatened by drought, flooding, and saltwater contamination due to sea level rise.”

U.S. Senator Edward Markey, a Massachusetts Democrat who chairs the Senate Climate Change Task Force and is a member of the Senate Environment and Public Works Committee, said in a statement Friday, “We can see, feel, hear and experience the impacts of climate change when our communities suffer sea level rise, forest fires, and super-charged hurricanes.”

“The Trump administration may want to bury this report so that it doesn’t get attention, but we can’t bury our heads in the sand to the threat of climate change. We need to take action now to reduce carbon pollution and implement the clean energy solutions that will help save our planet,” Senator Markey said.

“Climate change remains the most critical challenge that human civilization faces, and today’s report affirms that conclusion,” said Markey. “In this National Climate Assessment, our best scientists are sending up an emergency flare – we need to take action now to mitigate carbon emissions or ignore the risks posed by climate change at our peril.”

And the risks are many, the report finds.

“Rising temperatures are projected to reduce the efficiency of power generation while increasing energy demands, resulting in higher electricity costs,” the report warns.

Business will also feel the effects. “The impacts of climate change beyond our borders are expected to increasingly affect our trade and economy, including import and export prices and U.S. businesses with overseas operations and supply chains.”

The report acknowledges that, “Some aspects of our economy may see slight near-term improvements in a modestly warmer world. However, the continued warming that is projected to occur, without substantial and sustained reductions in global greenhouse gas emissions, is expected to cause substantial net damage to the U.S. economy throughout this century, especially in the absence of increased adaptation efforts.”

While Democrats are taking the report’s findings seriously, Republicans are nonchalant.

U.S. Senator Joni Ernst, an Iowa Republican, Sunday called for “balance” in responding to heightened concerns that the U.S. may face large-scale disasters, an economic downturn and a loss of jobs due to climate change.

“Any time we are putting regulation out, we need to consider impact to American industry and jobs,” Ernst said Sunday on CNN’s “State of the Union.” “We want to make sure that it makes sense going forward. There is a balance that can be struck there.” 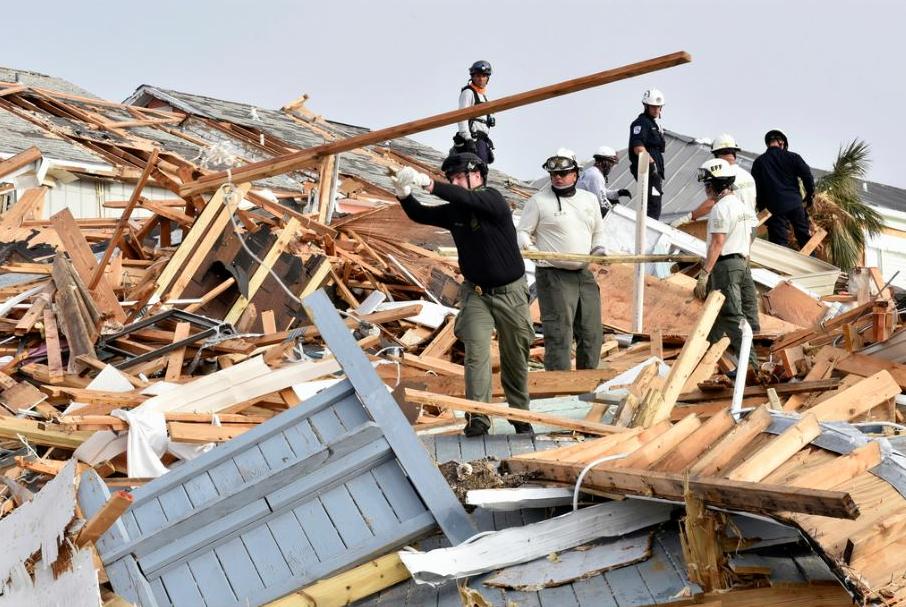 The USGCRP report warns that those likely to be worst affected by climate change include older adults, children, low-income communities, some communities of color and many Indigenous peoples, who rely on natural resources for their economic, cultural, and physical well-being.

Throughout the United States, climate-related impacts are causing some Indigenous peoples to consider or actively pursue community relocation as an adaptation strategy.

Many Indigenous peoples are taking steps to adapt to climate change impacts structured around self-determination and traditional knowledge, and some tribes are pursuing mitigation actions through development of renewable energy on tribal lands.

The report urges governments at every level to help cushion the blow, advising, “Adaptation and mitigation policies and programs that help individuals, communities, and states prepare for the risks of a changing climate reduce the number of injuries, illnesses, and deaths from climate-related health outcomes.”

While the efforts of communities, governments, and businesses to reduce risks and costs associated with climate change by lowering greenhouse gas emissions and implementing adaptation strategies have expanded in the four years since the last report, “…they do not yet approach the scale considered necessary to avoid substantial damages to the economy, environment, and human health over the coming decades,” the 2018 report warns.

“With continued growth in emissions at historic rates, annual losses in some economic sectors are projected to reach hundreds of billions of dollars by the end of the century – more than the current gross domestic product (GDP) of many U.S. states,” finds the report.

There are a few hopeful signs. For instance, transformations in the energy sector – including the displacement of coal by natural gas and increased deployment of renewable energy – along with policy actions at the national, regional, state, and local levels are reducing U.S. greenhouse gas emissions.

But this assessment shows that more immediate and substantial global greenhouse gas emissions reductions, as well as regional adaptation efforts, will be needed to avoid the most severe consequences of climate change in the long term.