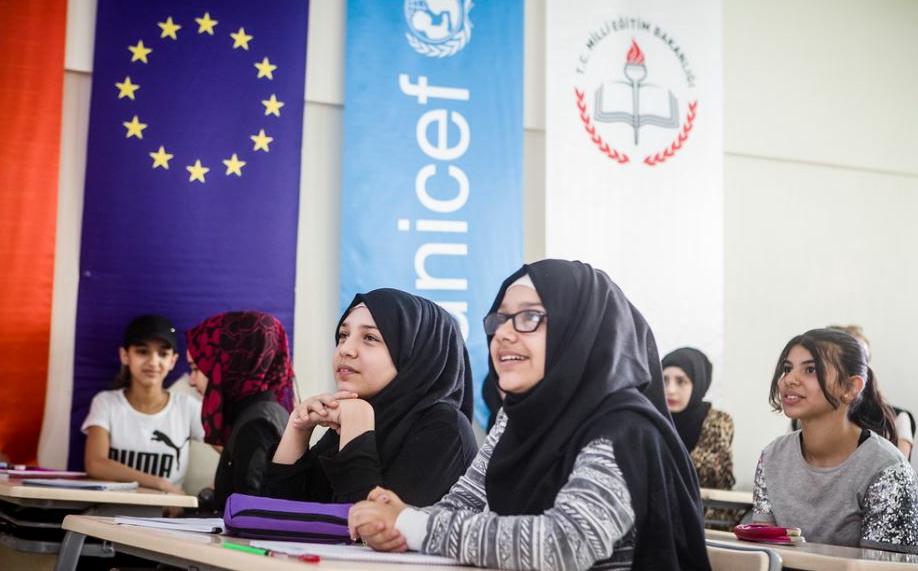 Syrian refugee girls who wait until after they are 18 to be married sometimes get to go to school. These girls are listening to a Turkish lesson in an Accelerated Learning Programme classroom in Haliliye Public Education Centre supported by European Union funding. September 26, 2018 (Photo by EU Civil Protections and Humanitarian Aid Operation) Creative Commons license via Flickr

ANKARA, Turkey, May 16, 2019 (Maximpact.com News) – “Young girls who have fled conflict and instability in rural Syria in search of a more peaceful and dignified life in Turkey can find themselves still at risk from a harmful traditional practice their families have brought from their homeland,” warn three women and a man writing for the Turkish Red Crescent , which is part of the International Red Cross and Red Crescent (IFRC).

“Even though Turkey’s laws require that people must be 18 years of age before they can marry, some Syrian migrant girls and boys aged less than 18 are being religiously married to adults with the consent of their parents. This can have profound negative consequences for the health and wellbeing of the children concerned,” write Debbie Busler, Benedetta Balmaverde, Damla Çalık and Gurvinder Singh.

Çalık works as a Protection Officer with the Turkish Red Crescent and is a graduate student in the Department of Sociology at Middle East Technical University  in Ankara.

And Singh is the Global Child Protection Senior Adviser with the International Federation of Red Cross and Red Crescent.

Founded in 1868 and now Turkey’s oldest and largest humanitarian organization, the Turkish Red Crescent has started a campaign against child marriage among refugees and migrants living in Turkey.

Turkey hosts the largest number of registered Syrian refugees in the world, currently 3.3 million, according to the UN High Commissioner on Refugees (UNHCR).

The incidence of child marriage has been falling in most parts of the world, but the four IFRC writers explain that it is “…common for there to be a rise in child marriages during emergencies and crises, as parents can see this as an option to provide protection and financial stability for their daughters. Cultural traditions together with lack of education and work opportunities confine girls to household chores, with no power to decide their own future.”

Now the staff and volunteers of the Turkish Red Crescent, which has been supporting Turkey’s large population of Syrian migrants and displaced people throughout the nine-year-long crisis, are looking out for children at risk of early marriage, and helping their families explore other choices.

There are alternatives Huriye Tak, health and psychosocial support officer with the Turkish Red Crescent, explained to the IFRC writers. “Parents are motivated by love and care, facing social dilemmas that we need to understand if we are to prevent child marriage. Alternatives like the conditional cash transfer programme for education can encourage families to keep their daughters in school. We also educate parents on the negative impacts of child marriage.”

Tak serves as a clinical psychologist with the Turkish Red Crescent community centers in the city of Izmir. She said, “Our character is largely defined by the relationship with our mother. It’s hard to imagine a healthy family where the mother is still a child. We respect the decision of others, but when we see such a harmful traditional practice in the community, we need to speak up against it.” 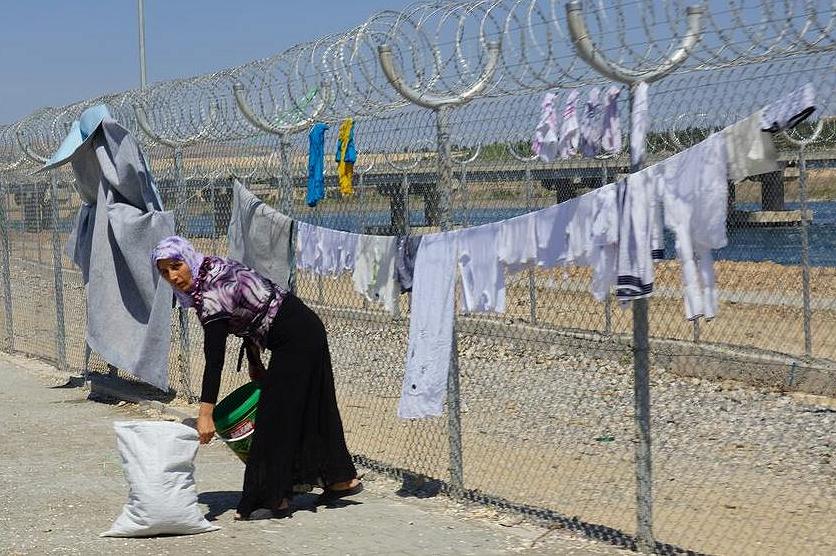 Syrian female refugees in Turkey are often exploited by employers, forced into prostitution or otherwise sexually exploited by husbands in marriages, which are often a commercial affair, according to a 2014 report from the Association for Human Rights and Solidarity with the Oppressed <http://world.mazlumder.org/>. December 15, 2014 (Photo by Nezih Talvas / UN Population Fund) Creative Commons license via Flickr.

When a marriage is planned but has not yet taken place, the Red Crescent meets the family to better understand their situation and offer alternative solutions. If there is a pending threat, they look after the girl at the community center until the authorities take over the case, explain the IFRC writers.

“Once a marriage has happened, it is very difficult to reverse it due to the social stigma that would follow the girl if she was to leave her husband. In these cases, the Red Crescent focuses on protecting the health and safety of the girl and any children she may have, referring them to local authorities. Volunteers meet the girl, her spouse, and her in-laws to determine what options are available,” they write.

Since the Syrian civil war began on March 15, 2011, the ongoing multi-sided armed conflict between the Ba’athist Syrian Arab Republic led by President Bashar al-Assad, and Syrian and foreign forces opposing both the Syrian government and each other, more than 3.5 million Syrian refugees have fled violence and persecution in Syria for Turkey.

Former U.S. government official Mark Ward, who worked on the Syrian-Turkish border from 2012-16 delivering hundreds of millions of dollars in aid into northwest Syria for communities that had been cut off by the Syrian government, explains in a piece for the UNHCR that most Syrian refugees didn’t want to leave home, but had to flee for their lives.

“Some faced forced conscription into the army to fight their fellow Syrians. Some paid huge bribes to escape torture for demonstrating peacefully against the regime,” writes Ward on The Conversation website . “Most couldn’t take another day of indiscriminate bombing of innocent civilians in schools, hospitals and markets.”

Incidents of child marriage increase as instability increases, making girls living in conflict or crisis settings particularly vulnerable to the practice, according to the International Women’s Health Coalition (IWHC), based in New York City.

Child marriage ends a girl’s childhood, curtails her education, minimizes her economic opportunities, increases her risk of domestic violence, and puts her at risk for early, frequent, and very high-risk pregnancies, the IWHC says.

Girls under 15 are five times more likely to die in childbirth than women in their 20s and face higher risk of pregnancy-related injuries.

Child brides are often unable to negotiate safer sexual practices and are therefore at a higher risk of HIV and other sexually transmitted infections, the IWHC warns.

The same four IFRC writers explained in an article last October that Syrian refugee children rarely attend school and spend their young lives at work. Even if young refugee girls remain single, virtual slavery and backbreaking labor are often their lot, but now the Turkish Red Crescent is reaching out to ease their lives.

Child labor among refugees on farms or in textile factories is a countrywide problem that Turkish Red Crescent child protection teams encounter often. Some refugee girls and boys are bullied by other children or teachers in school, which drives them away and leaves them with labor as their only option, the IFRC writers report.

Turkish Red Crescent psychologist Fatima Şahin explaines, “The living conditions here are not healthy, and children attending school are rather the exception than the rule. We do everything to protect the kids who face so many risks.”

Red Crescent volunteers and staff reach out to child workers and their families with humanitarian services. They are referred to local authorities to access basic services and receive tents, vaccinations and clean water. They are registered for the Conditional Cash Transfer for Education program thatencourages children to attend school and brings mobile child-friendly spaces to remote locations.

Şahin believes that among all services, psychosocial support is the most important. “The impact is not always visible right away,” she says, “but it appears inside the heart. Changes in self-confidence, healing and resilience happen over time.”

The Washington, DC-based Child Labor Coalition of the National Consumer’s League finds that 29 million women and girls worldwide are in modern slavery – 71 percent of the overall total of enslaved individuals.

On November 15, 2018, a committee of the UN General Assembly agreed on a third resolution on child, early and forced marriage. The resolution was led by Canada and Zambia, and was co-sponsored by 114 member states. An additional 12 member states joined as co-sponsors this year.

Among its native population, Turkey has one of the highest rates of child marriage in Europe, with an estimated 15 percent of girls married before the age of 18 and one percent married before the age of 15. But now Turkey has committed to eliminate child, early and forced marriage by 2030 in line with target 5.3 of the Sustainable Development Goals.

Featured Image: A 2016 study found child marriage rising among most vulnerable Syrian refugees in Lebanon. In this photo, a girl and a man who are not married participate in a protest against early marriage, before a girl is 18 years of age. (Photo courtesy UNFPA) Posted for media use.