UK: 10,000 Refugees Reunited With Their Families 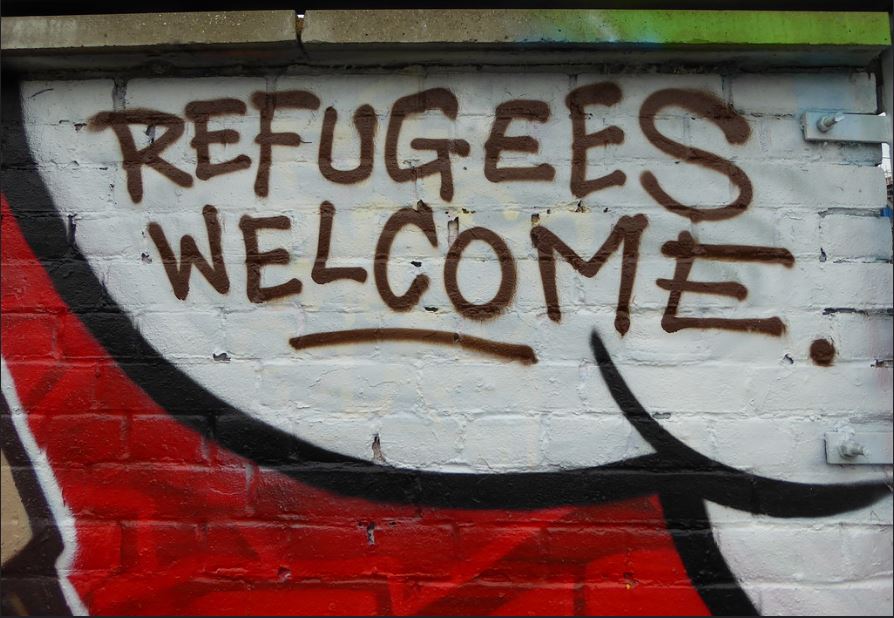 LONDON, UK, April 23, 2019 (Maximpact.com News) – Ten thousand people separated by war and persecution have been reunited with their families in the United Kingdom under a British Red Cross and International Organization for Migration (IOM) family reunification program, the agencies declared last week.

“Ten thousand people who are fathers, mothers, sons or daughters are once again together, often after years of separation and hardship,” said Dipti Pardeshi, IOM Chief of Mission in the United Kingdom. “IOM is proud to be a part of the family reunification process; reaching 10,000 people reunited here in the UK is a significant achievement.”

She says the IOM staff is aware that more and more people are seeking to access their right to reunite with family each year. “While I am heartened to see programs like the joint IOM-BRC family reunification program here in the UK, more must be done. This affects families around the world, and so countries should look at possibilities to bridge the gap between current legislation and the significant needs that exist,” Pardeshi said.

Since 2011, when the joint BRC-IOM Family Reunion Travel Assistance Programme began, 90 percent of the arrivals have been women and children joining husbands and fathers in the UK. The program supports refugees who are eligible to be reunited with their close family but cannot afford the costs of travel. 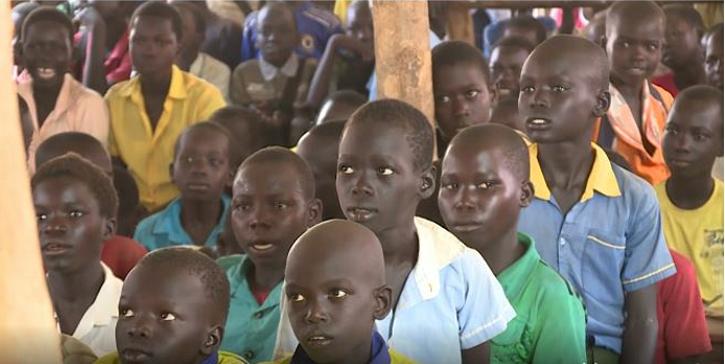 Boys displaced from South Sudan. More than 2.5 million South Sudanese refugees are currently struggling to survive in exile, the largest refugee situation on the African continent. By the end of 2019, the UN estimates more than 2.8 million people will have fled South Sudan. May 8, 2018 (Screengrab from video by UN High Commissioner for Refugees) Posted for media use.

Most of the 10,000 who have been reunited came originally from Syria or Sudan, fewer from Iran, Ethiopia and Eritrea.

The program provides one of the few safe routes for families who have been torn apart by conflict and persecution to be together again. For those eligible, the effort can potentially keep people from taking dangerous journeys – such as by sea across the Mediterranean or by desert to the sea – to join loved ones.

The UN’s International Organization for Migration’s Missing Migrants Project says that so far this year, there have been at least 740 migrant fatalities worldwide, a casualty rate of three people per day. Last year, an average of six people died daily attempting the journey across the Mediterranean.

In counting fatalities, the Missing Migrants Project includes migrants who die in transportation accidents, shipwrecks, violent attacks, or due to medical complications during their journeys. The project also counts the number of corpses found at border crossings that are categorized as the bodies of migrants on the basis of belongings or the characteristics of the death.

The count excludes deaths that occur in immigration detention facilities or after deportation to a migrant’s homeland, as well as deaths more loosely connected with migrants’ irregular status, such as labor exploitation. Migrants who die or go missing after they are established in a new home are not included in the data, so deaths in refugee camps or housing are excluded. The deaths of internally displaced persons who die within their country of origin are also excluded.

For Syrians, like “Khaled,” the danger of the journey was the reason he chose to travel alone, leaving a three-year-old son, Ali, in Lebanon with his grandmother.

“Then the boat sank,” he said. “I swam for five hours before I saw the lights of the rescue boat. If my son was there, I’m sure he would have died, I was so glad I hadn’t brought him with me. I thought of the lady and the baby and felt helpless.” 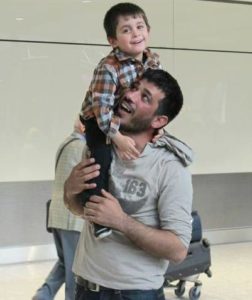 Khaled is reunited with his son at the airport under the IOM-British Red Cross Family Reunification program. 2019 (Photo courtesy British Red Cross) Posted for media use

Eventually Khaled reached the UK, where he was granted refugee status. He contacted the British Red Cross, which was able to bring his son to the UK under the joint BRC-IOM Family Reunion program.

“I felt huge happiness when I saw Ali at the airport. It is something I will remember forever. I said, ‘I want to kiss you’. He said, ‘Daddy, I’m scared.’”

“I told him ‘don’t be scared, you are safe here.’ I held him in my arms and kissed him,” said Khaled.

“While reuniting 10,000 people with their loved ones is a positive milestone for us, the costs, complexity and current rules make this pathway to protection out of reach for so many families – families who have already been apart for too long, separated by the most terrible circumstances,” said Alex Fraser, director of Refugee Support and Restoring Family Links at the British Red Cross.

“Being apart like this is incredible traumatizing for people who are already dealing with the effects of war and conflict. These families belong together, which is why we are calling on the government to widen the criteria of those who can apply for family reunion,” Fraser said.

Being able to afford travel is not the refugees’ only obstacle. The Red Cross and IOM partners see many more families who have been separated due to conflict or persecution but who cannot be together due to current legislation. This includes young refugees who arrive in the UK alone and are not eligible to sponsor parents to join them.

“Under current rules, young refugees who arrive in the UK alone are not allowed to bring their parents to join them. Every day that these children are separated from their parents is a day they will not get back,” Fraser lamented.

The British Red Cross is asking UK decision makers to:

Allow young adults who depend on their parents to be able to join their families in the UK.

Once families are reunited within the UK, they can find refuge through the group City of Sanctuary, which now involves over 120 villages, towns, cities and regions across the UK and Ireland making their areas safe and welcoming to refugees.

City of Sanctuary UK holds the vision that “our nations will be welcoming places of safety for all and proud to offer sanctuary to people fleeing violence and persecution.”

Now, however, the UK government is trying to discourage migrants from crossing the English Channel from France, moving across busy shipping lanes.

“The simple truth is that refugees would not risk their lives on a journey so dangerous if they could thrive where they are,” said Melissa Fleming, UNHCR UK Office for National Statistics. 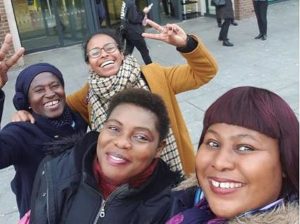 Happy women who will take a new computer course for refugee women at the UK’s Birkbeck University in London. November 2018 (Photo courtesy Women for Refugee Women) Posted for Media Use.

Net migration to the UK from countries outside the European Union has hit its highest level for 15 years, according to the Office for National Statistics. Figures show 261,000 more non-EU citizens came to the UK than left in the year ending September 2018 – the highest since 2004.

By contrast, net migration from EU countries has continued to fall to a level last seen in 2009.

Non-EU net migration was the highest since 2004; this follows a gradual increase in immigration of non-EU citizens over the past five years for both work and study.

Continued uncertainty about the UK’s place in the EU is reflected in the latest net migration statistics, with EU net migration declining by 70 percent since the Brexit referendum and at the lowest level since 2009, says the Migration Observatory at Oxford University.

By contrast, the data show gradually rising levels of net migration from non-EU countries – reaching the highest levels since 2004. This is due to higher levels of work-related and study-related migration.

Madeleine Sumption, director of the Migration Observatory, said, “The overall story the data tell on EU migration is clear. Britain is not as attractive to EU migrants as it was a couple of years ago. That may be because of Brexit-related political uncertainty, the falling value of the pound making UK wages less attractive, or simply the fact that job opportunities have improved in other EU countries.”

“EU net migration happened to be unusually high in the run-up to the referendum, so at least some of this decline would probably have happened anyway even without Brexit,” Sumption said.

After Brexit, the UK Government wants new restrictions on future EU migration. Most EU citizens will only be eligible for short-term work visas of up to one to two years, with no route to settlement. This new system is expected to take effect in 2021.

The UK Government’s December 2018 White Paper on post-Brexit immigration introduces a skills-based system with plans to do things differently for particular groups of workers, such as researchers, entrepreneurs, creative industry workers and sportspeople, the self-employed, and seasonal agricultural workers, but there are no specific details.

In her Foreword to the White Paper on post-Brexit immigration, Prime Minister Theresa May sets forth her Government’s latest version of immigration policy, saying, “When the British people voted to leave the European Union in 2016, they sent a clear message: they wanted things to change. One of those calls was for Britain to take back control of its borders.”

“As we leave the European Union, free movement will end. For the first time in decades, it will be the democratically elected representatives of the British people who choose who comes into our country.”

“This White Paper sets out how we will use this moment to introduce a new, skills-based immigration system. This will be a system where it is workers’ skills that matter, not which country they come from. It will be a single system that welcomes talent, hard work, and the skills we need as a country.

It will attract the brightest and best to a United Kingdom that is open for business.”

“Migrants have made a huge contribution to our country over our history – and they will continue to in the future,” wrote May. But it will also be an immigration system that is fair to working people here at home. It will mean we can reduce the number of people coming to this country, as we promised, and it will give British business an incentive to train our own young people.”

After Brexit, there will no longer be one immigration system for non-Europeans, and another for EU citizens. The future system will apply in the same way to all nationalities – EU and non-EU citizens alike. 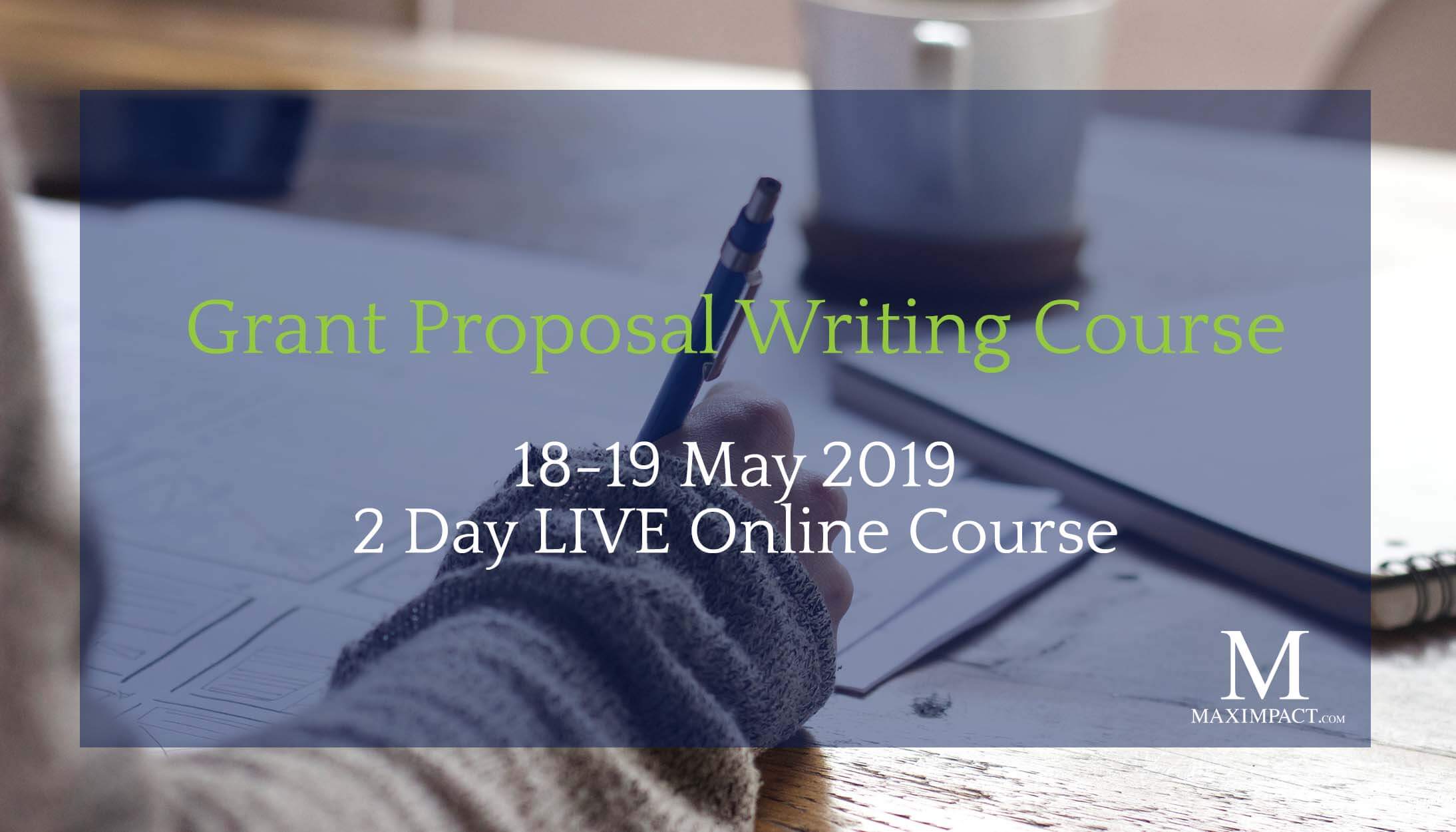