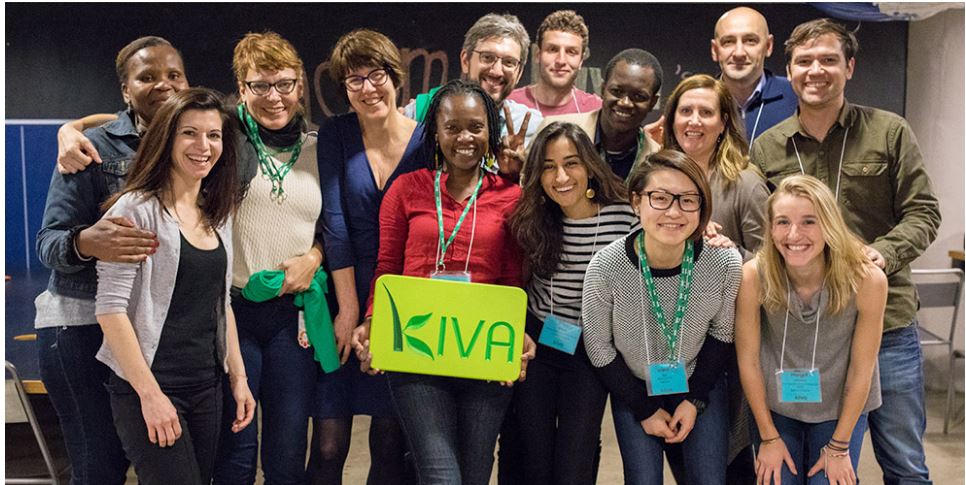 Kiva fellows participate in a a full-time, 6-month paid program. They come from a wide range of backgrounds and have gone on to work all over the world at companies and organizations, such as Apple, Grameen America, Save the Children, IDEO.org, Box and USAID. This is the current cohort of Kiva fellows. (Photo courtesy Kiva) Posted for media use.

SAN FRANCISCO, California, June 20, 2017 (Maximpact.com News) – Crowdfunding has been growing exponentially, with over $2 billion raised in the United States in 2015 alone. Now, women-led crowdfunding projects are enjoying success through this new path that allows them to realize their dreams.

“In connecting creators and entrepreneurs directly with customers and funders, it transforms the opaque and oligarchical market for early-stage fundraising into a more democratic, open one,” wrote Ethan Mollick in the “Harvard Business Review” last year.

Instead of relying on venture capitalists and marketers to project potential demand for new innovations, creators can directly reach out to customers and communities to refine ideas and gauge interest.

Bank of America and Kiva, a crowdfunding platform for social good based in San Francisco, have joined forces to support women’s entrepreneurship through the Women’s Entrepreneurship Fund.

Bank of America’s commitment of $250,000 enabled the Fund to cross the US$1 million dollar milestone and will help Kiva reach a total of US$1 billion in loans crowdfunded since the site was founded in 2005.

“Capital is a vital building block for women entrepreneurs around the world,” said Anne Finucane, vice chairman at Bank of America. “We’re honored to be a founding partner of the Kiva Women’s Entrepreneurship Fund as one example of how we deploy our capital to fuel women’s economic growth and build thriving communities.”

Individuals can support women’s entrepreneurship by visiting Kiva.org and choosing who they want to receive $25 or more. They can choose to support a woman in El Salvador planning to grow her agriculture business by hiring more employees. Individual loans of $25 or more are collected until a woman’s full loan request is crowdfunded.

The Women’s Entrepreneurship Fund supports women entrepreneurs like Lindiwe, a 22-year-old woman living in rural Zimbabwe. Lindiwe received entrepreneurial training from Camfed and a Kiva loan crowdfunded by 11 citizen lenders. Lindiwe now operates three businesses in her village - a poultry business, a small shop and a line of juices that she sells to local laborers.

The loan helped her scale her juice business from 20 liters per week in sales to 200 liters. Her goal is to hire more employees and to be a role model to show girls what is possible when they persevere in education and work hard.

“I want to go far! I want to create as many employees as I can, especially girls,” said Lindiwe. “Helping girls to stay in school, helping them to achieve what they want in life, that is my favorite part.”

“These citizen lenders joined Kiva with the understanding that sometimes just a little bit of capital can be the bridge between talent and opportunity,” said Premal Shah, Kiva’s president and co-founder. “And when women entrepreneurs cross that bridge, they bring their families, communities and all of us with them.”

On June 13, funds that citizen lenders provided to women on Kiva.org were matched dollar-for-dollar by Bank of America, up to $250,000.

Since Kiva was founded in 2005, 2.6 million entrepreneurs from 83 countries have received nearly US$1 billion in loans, each crowdfunded in $25 increments on Kiva.org by 1.6 million citizen lenders.

Kiva says on its website, “Women reinvest 80 percent of their income in the wellbeing and education of their families With the same amount of land, women can increase crop yields by 20 percent, reducing world hunger for 150 million people Women business owners set an example for the next generation of students and leaders.”

A study from the University of Pennsylvania released in July 2016 found that on the popular crowdfunding platform Kickstarter, where the focus is on creativity and the arts, 41 percent of 61,654 campaigns that raised over $1,000 were created by women.

And now there’s a women-only crowdfunding platform. In late 2016, Karen Cahn launched iFundWomen, a crowdfunding venture for campaigns by female entrepreneurs. “There is such a massive funding gap for women in venture,” said Cahn. “It’s a little-known fact that women only get about 2 to 6 percent of venture dollars. We knew we had to do something about that.”

The idea for iFundWomen got its start last summer when Cahn and three other women: Sarah Sommers, Kate Anderson, and Shilpa Raut, decided to launch a digital video series called “You’re Not Crazy” and raise the money for it with crowdfunding.They funded their first campaign in three months.

The potential global impact for rapidly built affordable living and work spaces is huge, especially as our urban centers grow, Satcher explains. “We intend to disrupt the $400 billion construction industry by the materials we use, how we recycle them and how we deliver.”

Also on iFundWomen, the Music City Icons Semi-Pro Women’s Basketball Team is seeking $10,000 to provide an opportunity for women to continue to play basketball and be leaders in the Nashville, Tennessee business community. “Our program designed around opportunity and development,” says Music City Icons owner Renee Bobb.

A totally different crowdfunding request from the other side of the world on iFundWomen is State of Benefit, which is seeking $7,500. This early stage mother-daughter ecomm startup ethically sources products made by women in Pakistan to ensure women artisans are getting living wages, working in safe environments, while bringing beautifully made jewelry, garments, and housewares into the U.S. market.

Launched in 2010, the San Diego-based GoFundMe is the world’s largest social fundraising platform, with over $3 billion raised so far from a community of more than 40 million donors worldwide.

Here, crowdfunding requests can be small in the amount of money they seek, but large in heart and in effect.

On this popular crowdfunding site, a 95-year-old grandmother, Grandma Great, is trying to raise US$1,000 to buy fabric to make the blankets she sends to mothers and babies in need in Kenya.

She has only $80 left to raise. “I took the first batch with me to Kenya in 2010 on a medical mission. We used the blankets to help rural medical clinics and community health workers with new mothers and babies,” writes Jeanette Nelson, who posted her grandmother’s appeal.

“I showed my grandma videos and pictures of the women receiving the blankets. Told her about how they were being used, and she has been diligent in her service to the mamas and babies of rural Kenya ever since,” writes Nelson. “I’m not sure if she is aware of her amazing legacy of service, but I will be forever grateful for her example.”

GoFundMe allows users to create their own website to describe what they are raising money for. Once the website is created, users can share their project with people through social network links on Facebook and Twitter and by email. People can donate to a cause through the website using a debit card or credit card and leave comments on the site in support of the project. GoFundMe generates revenue by automatically deducting a 5% fee from each donation.

“It’s incredible to see all the amazing ways people are using GoFundMe to make a difference in the lives of others,” says co-founder Brad Damphousse. “We feel very fortunate to have a front row seat to an ever-increasing number of uplifting, inspiring, and successful fundraising campaigns.”

Featured Image: Karen Cahn is the Founder and CEO of iFundWomen, a crowdfunding platform for women launched in 2016 which has since raised $600,000 for 100 entrepreneurs. The mission of iFundWomen is to close the funding and confidence gap for female entrepreneurs by working with early stage companies on coaching, brand positioning, and sales strategies. (Photo courtesy Karen Cahn) Posted for media use.