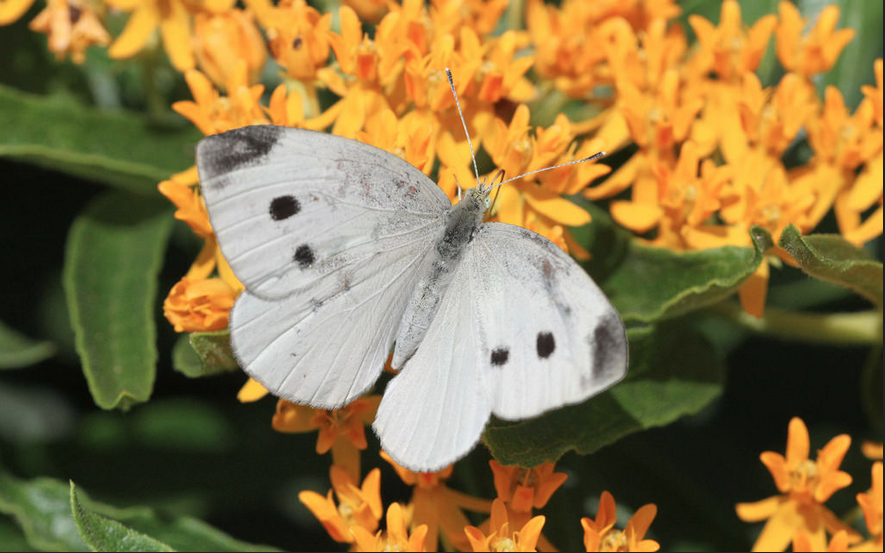 In its caterpillar stage the Cabbage White butterfly is a pest that eats its way through cabbage crops across Europe, North Africa, Asia, North America, Australia and New Zealand.

But University of Exeter scientists have seen past the pest stage to the butterfly stage.

The Cabbage White butterfly takes flight before other butterflies on cloudy days because its V-shaped wing position, known as reflectance basking, maximizes the concentration of solar energy on its thorax.

By mimicking this V-shaped posture the butterflies take to warm their flight muscles before take-off, and the structure of their wings, the researchers found that the power produced by dye-sensitized, thin-film solar cells can be increased by almost 50 percent.

“This proves that the lowly Cabbage White is not just a pest of your cabbages but actually an insect that is an expert at harvesting solar energy,” said Professor Richard ffrench-Constant, who conducts research into butterfly mimicry at the University of Exeter.

The V-shaped wing position is “strikingly similar to the V-trough solar concentrator which uses mirrored side walls to focus light towards a small area of photovoltaic material, thereby increasing the output power of any solar cell to which it is attached,” the scientists write.

The team found that the optimal angle by which the butterfly should hold its wings to increase temperature to its body was around 17 degrees. This angle increased the insect’s body temperature by 7.3 degrees Centigrade compared to when the wings were held flat.

A dye-sensitized solar cell is a low-cost, thin film solar cell. This photoelectrochemical system is based on a semiconductor formed between a photo-sensitized anode and an electrolyte.

To create more efficient solar cells, the researchers designed a novel photoanode structure, the part of the solar cell that absorbs the sun’s energy, using the wings of the Cabbage White as biotemplates.

Photoanode structures with arranged ridges and ribs made of nanoparticles were synthesized onto a fluorine-doped glass substrate coated with tin oxide.

Analysis indicated that the light-harvesting efficiencies of these photoanodes were higher than the normal titania photoanode without butterfly biotemplates.

The scientists replicated the wings to develop a new, lightweight reflective material for solar energy production.

“Biomimicry in engineering is not new,” said the study’s lead author Professor Tapas Mallick. “However, this truly multidisciplinary research shows pathways to develop low-cost solar power that have not been done before.”

Increasing solar cell efficiency by 50 percent is a big deal as the world weans itself off power generated by coal, oil and gas, which raises the planetary temperature.

Because there are many different types of efficiencies when it comes to solar cells, it can be difficult for non-specialists to do direct comparisons.

Currently, the official accredited World Record Efficiency is 14.1 percent, but efficiencies exceeding 15 percent are being achieved in the laboratory, and experts forecast efficiencies beyond 20 percent for the near future.