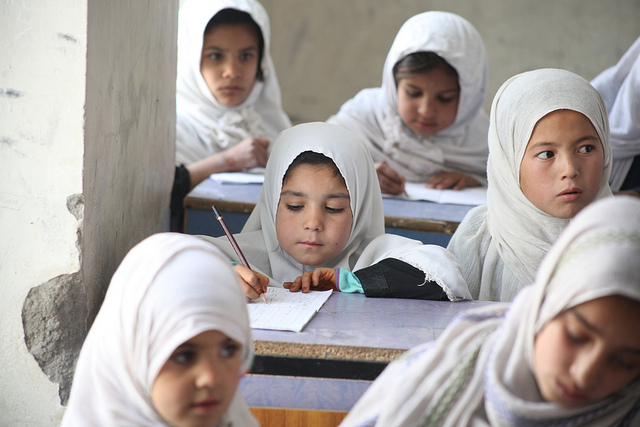 The world is crying out for education. For 4,738,116 respondents to the My World digital survey (and counting) “a good education” is, is the overwhelming choice for every age group and every sector for the change that “would make the most difference” to their lives.

The role of education in improving the people’s lives and encouraging economic development is widely recognized, making it a focus for national governments, philanthropic bodies and international development agencies. Increasingly, it’s viewed as an indispensible tool for easing poverty, reducing inequality and boosting economic sustainability. Research has shown that one year of education can increase wages by five to 15 percent, while each year of secondary school raises them by up to 25 percent.

There’s little doubt about the value of education. Yet, despite making commitments to Millennium Development Goals in education, the global community has so far failed to come up with the investment needed to hit education targets. While spending on education by low-income countries has increased by an average of 2.9 percent to 3.8 percent of GDP over the last decade rich countries have not stepped up to the same degree.

In 2010 estimates showed that an additional $16 billion per year would be needed just to provide basic education for children, youths and adults by 2015. However, actual spending has hovered around the $3 billion mark annually. The result is a funding gap that has almost doubled in the intervening years. Today, estimates place the annual financing shortfall at a staggering $26 billion.

It now seems likely that the Millennium Development Goal for education will not be reached by the 2015 deadline and there are concerns on the part organizations like Education for All about what will happen to education development post-2015 and in years to come.

In a further development, low-income countries and poor populations aren’t the only ones facing an education crisis. The education systems in rich countries like the US, the UK and Australia, for instance, are also suffering from the effects of squeezed public budgets and skyrocketing costs, especially in the higher education sector. This has left educational attainment rates dropping, especially among poor people and minority groups, over a number of years.   Many would-be students are priced out of access to higher education just when the need for an educated workforce is on the rise.

So what can be done to help the poorest attain access to quality education and the better-off optimize their access to higher forms of learning? The key, recent research suggests, is to bring more private capital into the sector and to experiment with new kinds of investments that target specific educational problems and meet the needs of specific groups.

In many parts of the world, education has until now been the sole preserve of governments and development aid agencies, but there is evidence that this is beginning to change as new funding approaches — like impact investing— gain popularity and prove their viability. Though governments and development aid agencies will continue to play a central funding role, the education sector is now actively looking for ways to attract private capital, often in the form of impact investment, as a means to fill that yawning $26 billion funding chasm.

Though it’s early days, there’s already evidence that impact finance can be effective in education.  George Soros’ Open Society Foundations have produced some first findings on impact investing in developing countries’ education systems. The results suggest that workable models are evolving on a small scale, often in collaboration with governments, and some are already showing respectable track records of financial return and demonstrable benefit.

These indications are hopeful, yet impact investing in education is still in its infancy. Education accounted for only 3% of the investments of participants in the GIIN’s recent sector survey, a figure that suggests that impact investors have been hesitant to engage in this sector.

The OSF report confirms this image of tentative, early-stage activity in education by impact investors:  “Most deals remain small, and investments in schools currently dominate deal-making, with more innovative technology and management models just beginning to emerge. As yet, few business models deliver strong immediate financial return while reaching the most vulnerable beneficiaries.”

More worrying perhaps is the fact that impact’s involvement in education investing remains split into two camps, according to the report. On the one hand there are impact investors focused on “reaching the lowest income populations without expectation of any financial return”; on the other are investors who expect market rate returns and place capital into deals that “target middle and upper class populations.”

By now, this is a familiar situation for impact, with well-meaning investors in many sectors still struggling to find ways to engage with the middle ground and find models that meet needs while maintaining profitability. Yet, given the pressing global demand for education, there is enormous potential for innovation, both in terms of finance models and in terms of education delivery methods. With more impact engagement—and a renewed commitment by the education sector to finding new ways to finance and deliver good quality education on all levels—there is scope for significant  positive change in which impact investing can play a significant role.

By deepening its commitment to investing in education, the impact community has the opportunity to help solve one of the world’s greatest challenges.In the next blog in this series, we’ll be looking at the places where impact capital has the potential to be most effective in the education sector. As the need for education continues to grow, so will the range of methods and approaches for private capital, including public-private collaborations, an expanded role for impact intermediaries, and new technologies with the potential to deliver education to underserved communities as never before.
Like this blog? Subscribe to our newsletter or follow us on Twitter.

One thought on “Why the Education Sector Urgently Needs Impact Capital”